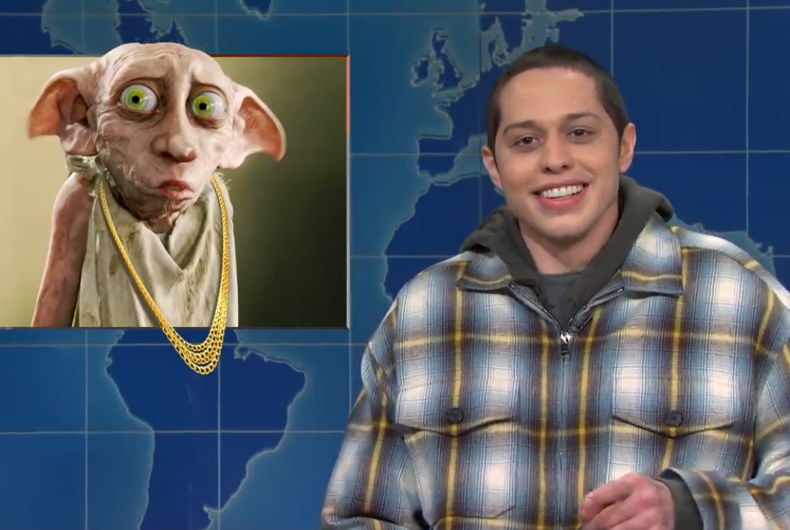 Pete Davidson (right), in comparison to "Dobby the House Elf" (left), one of Rowling's characters, in a segment of Weekend Update on Saturday Night Live.Photo: Screenshot / YouTube

In the latest episode of Saturday Night Live, Pete Davidson stopped by the news desk in the “Weekend Update” segment.

The segment’s guests typically have some harsh words for current topics, and Davidson was no different this time around. The self-deprecating comedian was bought in to discuss J.K. Rowling, who has remained in the headlines recently over her critical comments on transgender people and her view of feminism.

In response to segment co-host Colin Jost asking what he thoughts on her views, Davidson implored viewers to “never get any tattoos,” referencing one he got years ago based on Rowling’s signature work, the Harry Potter franchise.

The comedian, far from afraid to mock himself, jokes he has them because “he’s not psychic,” claiming that he couldn’t foresee that Rowling “was going to go all Mel Gibson on us.”

He claims that he “longs” for going back to the times when the worst Rowling had contributed to society “were those Fantastic Beasts movies.”

“No discrimination there, they harmed us all equally.”

Finally, after further questioning by Jost, he goes on to call her comments “very, very disappointing.”

“What’s wrong with her, Colin? She creates a seven-book fantasy series about all types of mythical creatures living in harmony with wizards and elves, and the one thing she can’t wrap her head around is Laverne Cox? She’s a national treasure!”

Davidson then admits that her line of thinking isn’t that surprising, considering how stereotypical the “little giant-nosed Jew goblins” seen throughout the franchise are. “I can say that,” he adds, “because I’m half-goblin.”

In the end, Davidson – who has spoken extensively about his love for the franchise – jokes that he’ll probably never read the books again because he “never read the books, and only saw part of [the film, Prisoners of] Askaban on a plane once.”

With Amy Coney Barrett on the Supreme Court, could marriage equality be in jeopardy?