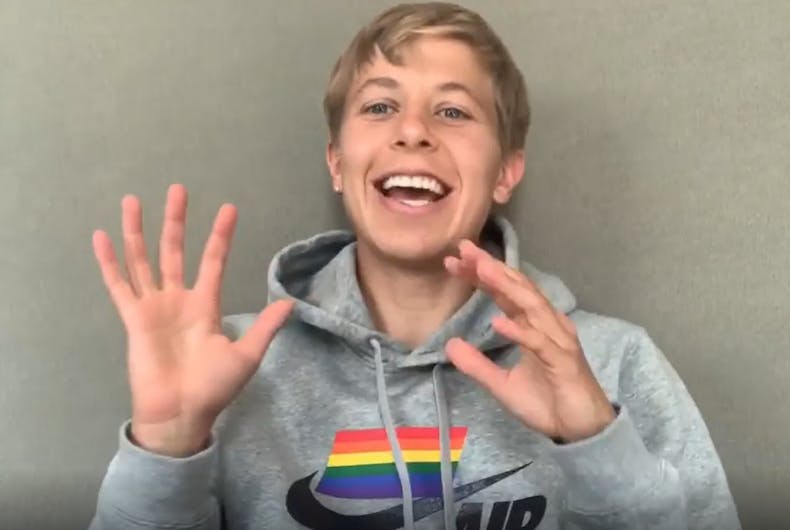 Quinn, 25, wrote that “coming out is HARD (and kinda bs)” in a post yesterday. “For me it’s something I’ll be doing over again for the rest of my life,” they wrote.

They also wrote that they use “they/them” pronouns in their Instagram profile.

Quinn won a bronze medal at the 2016 Olympic games with the Canadian team and played in the 2019 Women’s World Cup, making them one of the world’s most prominent out transgender athletes.

In their post, Quinn wrote that they have “lived as an openly trans person with the people I love most for many years, I did always wonder when I’d come out publicly.”

And they’re coming out now because they “want to be visible to queer folx who don’t see people like them on their feed.”

In their coming out post, Quinn said that cisgender people should try to be better allies to trans people by practicing “they” pronouns in the mirror, voting, putting their pronouns in their online profiles, and following trans people on social media.

Coming out is HARD ( and kinda bs). I know for me it’s something I’ll be doing over again for the rest of my life. As I’ve lived as an openly trans person with the people I love most for many years, I did always wonder when I’d come out publicly. Instagram is a weird space. I wanted to encapsulate the feelings I had towards my trans identity in one post but that’s really not why anyone is on here, including myself. So INSTEAD I want to be visible to queer folx who don’t see people like them on their feed. I know it saved my life years ago. I want to challenge cis folks ( if you don’t know what cis means, that’s probably you!!!) to be better allies. It’s a process, and i know it won’t be perfect, but if I can encourage you to start then it’s something. 1) put your pronouns in your bio 2) follow/ listen to other trans/nb voices ( @janetmock , @ashleemariepreston , @alokvmenon to name a few :)) 3) practice using gender neutral pronouns with friends/ in a mirror 4) vote 5) start to catch yourself making assumptions about people in public/ bathrooms/ any space

Quinn was already out as queer for years, according to OutSports. They were one of 40 out LGBTQ athletes who participated in the Women’s World Cup last year and have been open about their relationship with women.

#Repost @emmahcarlson01 ・・・ "The game attendant asked if we were dating and if he could take a picture of us. I wish I could've said yes to both. Lots of love for my state fair bae 😍🙈❤" haha #sorryjoe

Earlier this year, Quinn participated in Playing for Pride, a campaign to raise awareness about LGBTQ people in sports. In a video announcing their participation, they called out “the policing of trans bodies” and said that more work needs to be done to fight racism, homophobia, and transphobia in sports.

“Black people in the LGBTQ community face disproportionate levels of violence and discrimination,” saying that athletes need to “amplify the voices of our fellow Black, LGBTQ athletes and discuss topics with intersectional lenses.”

Hi hi this year @playingforpride will be a raffle for a signed Quinn pride reign jersey- in order to enter please respond to this post with a screenshot of your donation confirmation ( donate through link in my bio) and the winner will be chosen in 48 hours! Check out rad athletes advocating in the sports community: @layshiac @jasoncollins_98 @team_patricio_manuel