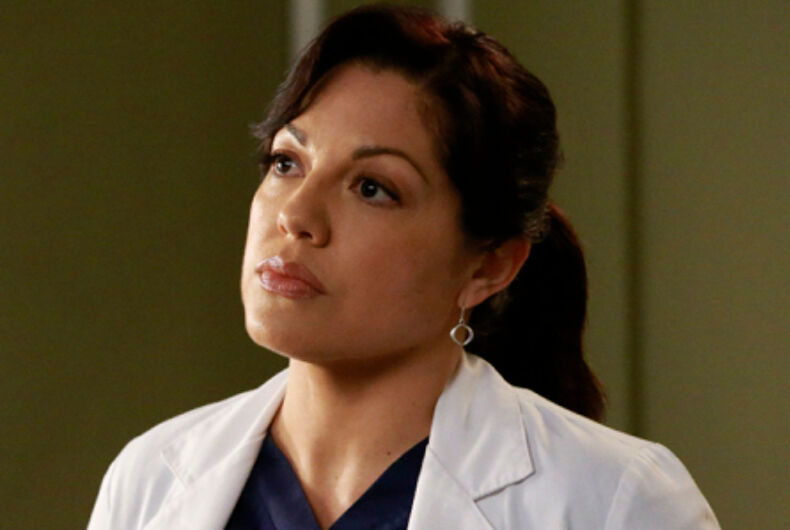 Sara Ramirez, the actor who played the bisexual character Callie Torres on the medical drama TV series Grey’s Anatomy, came out as non-binary in an August 27 Instagram post.

The post — which showed Ramirez with a crop top haircut — was captioned: “New profile pic. In me is the capacity to be Girlish boy, Boyish girl, Boyish boy, Girlish girl, All, Neither, #nonbinary.”

Related: Jennifer Lopez is a proud auntie when she does an introduction for her non-binary nibling

Ramirez previously came out as bisexual in October 2016 while making remarks at the True Colors United’s 40 to None Summit. True Colors United is singer Cyndi Lauper’s anti-homelessness organization for LGBTQ youth, and the 40 to None Summit (now renamed the Impact Summit) was so named because 40% of youth experiencing homelessness in America are LGBTQ.

New profile pic. In me is the capacity to be Girlish boy Boyish girl Boyish boy Girlish girl All Neither #nonbinary ♥️💛🤍💜🖤♥️

At the time, Ramirez said:

“And, because of the intersections that exist in my own life: Woman, multi-racial woman, woman of color, queer, bisexual, Mexican-Irish American, immigrant, and raised by families heavily rooted in Catholicism on both my Mexican and Irish sides. I am deeply invested in projects that allow our youth’s voices to be heard, and that support our youth in owning their own complex narratives so that we can show up for them in the ways they need us to.”

Ramirez, who has been married to husband Ryan DeBolt since 2011, is a member of the True Colors Fund board of directors and has generally been an outspoken advocate for LGBTQ rights.

In 2017, Ramirez spoke out against biphobia in an episode of ABC’s The Real O’Neals, saying they were “disheartened and disappointed” by a biphobic joke made by the show’s openly gay character Kenny. On the Jan. 17, 2017, episode of the show, Kenny (played by Noah Galvin), compared bisexuality to having “webbed toes” or “money problems.”

Ramirez said, “I will invest my brand where I’m respected,” before ABC eventually apologized for the joke.

Republican convention ends with a whimper of grievances & allegations

J.K. Rowling had to return a civil rights award & spouted off more transphobia while doing it