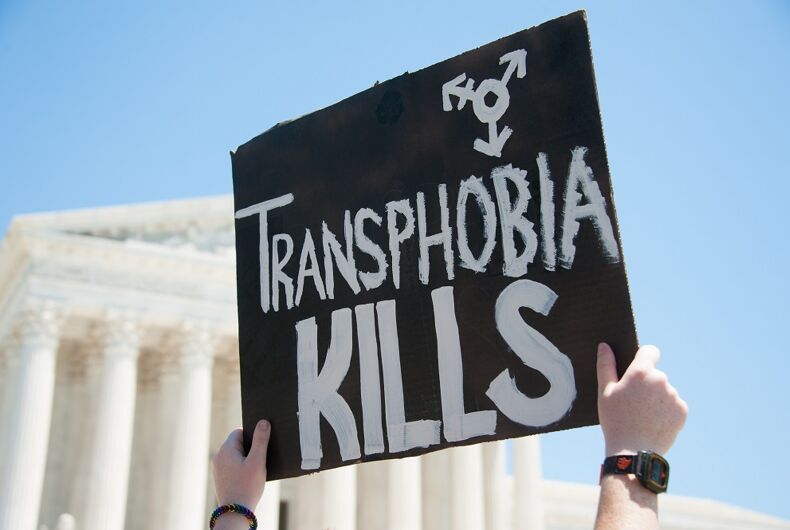 Sign held at the U.S. Supreme Court at the March for Marriage in Washington, DC on June 25, 2016.Photo: Shutterstock

Harry Potter creator J.K. Rowling, along with over 100 journalists, academics, and pundits, signed an open letter in support of the “free exchange of information and ideas” and denouncing “severe retribution in response to perceived transgressions of speech and thought” that was published yesterday in Harper’s Magazine.

The people who signed the letter hold a diverse set of beliefs, including several who are adamantly opposed to transgender equality as well as two transgender people – celebrated author Jennifer Finney Boylan and conservative economist Deirdre McCloskey. Boylan has already apologized for signing the letter.

Related: Here are the top 10 books about trans issues that every cisgender person* should read

The short letter says that the “free exchange of information and ideas… is daily becoming more constricted.” The letter references several vague incidents in academia – “a researcher is fired for circulating a peer-reviewed academic study” – and journalism – “editors are fired for running controversial pieces” – but the letter itself does not name what specific attacks on free speech it is referring to.

Several of the signers have made anti-transgender statements in the past, often disseminating false information or presenting transgender people as a threat and then using “free speech” to claim that they are the victims of their critics instead of engaging with criticism in good faith.

Rowling, for example, has recently said that gay people are being forced to transition as a form of conversion therapy and said that transgender people erase both women’s and gay people’s identities. When she was criticized for those statements, she claimed that she was the victim and was being silenced, even though she has continued to tweet her anti-transgender opinions to her over 14 million Twitter followers.

Journalist Jesse Singal, who also signed the letter, has a history of writing articles that activists have criticized him for anti-transgender bias and has misinterpreted scientific literature on transgender people in his articles. He has characterized that criticism of his work as “groupthink” and positioned himself as a defender of free speech, even as he continues to get published in prominent magazines.

So some of Boylan’s fans were surprised to see her name on the letter along with Rowling, Singal, and conservatives like New York Times columnists David Brooks and Bari Weiss. And this morning Boylan apologized for signing the letter. Boylan wrote the introduction to Trans Bodies, Trans Selves and is the author of her critically-acclaimed memoir She’s Not There: A Life in Two Genders.

“I did not know who else had signed that letter,” Boylan wrote on Twitter. She said she believed the letter was “a well meaning, if vague, message against internet shaming.”

She said she knew about a few of the other signers, citing retired MIT professor Noam Chomsky, Handmaid’s Tale writer Margaret Atwood, and feminist Gloria Steinem, but did not list Rowling, Singal, or other opponents of transgender equality had signed the letter.

“The consequences are mine to bear. I am so sorry.”

I did not know who else had signed that letter. I thought I was endorsing a well meaning, if vague, message against internet shaming. I did know Chomsky, Steinem, and Atwood were in, and I thought, good company.

The consequences are mine to bear. I am so sorry.

Tufts University history professor Kerri Greenidge asked for her signature to be removed from the open letter as well. A Harper’s representative told the Washington Post that they got confirmation that she had agreed to the letter but removed her name anyway.

I do not endorse this@Harpers letter. I am in contact with Harper's about a retraction

University of Illinois at Chicago economics professor Deirdre McCloskey – the other transgender person who signed the letter – has not spoken publicly about it, but she has in the past compared free speech to economic freedom, both of which she supports.

Boylan said that the letter was “vague,” which is probably why the signers are so ideologically diverse. “Free speech” is something most people say they value, but many people who advocate free speech for themselves and people who agree with them are often willing to attack the careers and lives of people who disagree with them.

For example, out New York Times columnist Bari Weiss signed the letter, but she allegedly protested in college against professors she believed were too critical of the government of Israel. Her student group and the larger movement resulted in professors saying they felt like they were being “spied” on, and it was criticized by the New York Civil Liberties Union as a “threat to academic freedom.”

Editor’s note: A previous version of this article incorrectly identified Boylan as the author of Trans Bodies, Trans Selves. We regret the error.