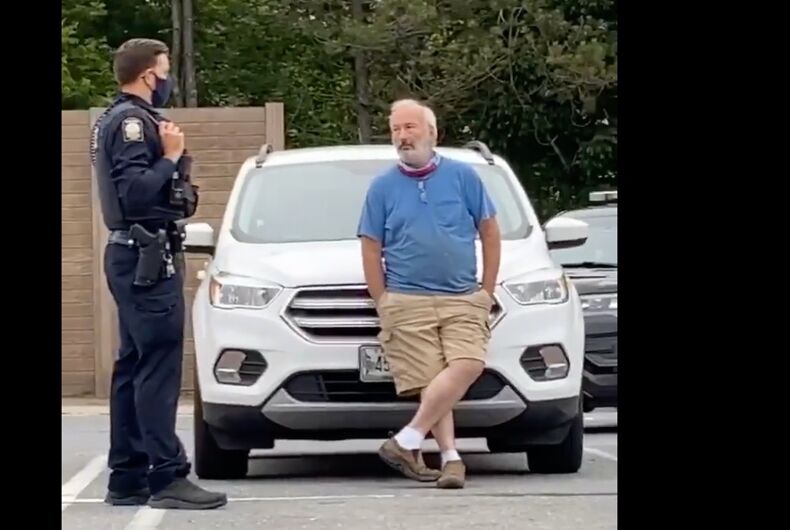 Michael Roylos speaks with an officer after alleging attacking a woman in a supermarket parking lot.Photo: Screenshot

A Portland, Maine business owner has been charged with aggravated assault after launching an unprovoked attack on a woman in a supermarket parking lot.

Screaming anti-gay slurs, the man beat the woman because he didn’t like how she parked her car.

“He attacked me after calling me a ‘fucking fa***t’ put me in a chokehold and started punching me in the back of the head,” victim Alana Reali wrote a Facebook post that included photos of the man and his license plate.

“Thankfully there were people there as I was screaming bloody murder. If no one was around this man would have killed me.”

Police have confirmed the man has been identified as Michael Roylos.

Roylos apparently took exception to how Reali parked her car. She pulled between two large trucks and then eased into the empty space in the next row. According to the Bangor Daily News, Roylos confronted Reali about the common parking maneuver, telling her “she can’t drive through parking spaces like that.”

When Reali ignored him and continued walking to the store, Roylos continued his tirade complete with homophobic slurs.

She says she returned to her car to get her phone after she felt threatened and Roylos attacked her, shouting, “I’ll kill you, f****t.”

Reali was able to break free as bystanders intervened and called the police. Both Reali and Roylos were still on the scene when the police arrived.

Officers let him go since they didn’t witness the assault, making the crime a misdemeanor. After reviewing evidence and speaking to witnesses, authorities decided to increase the severity of the charges and have issued him a summons.

The man has been charged with “aggravated assault, assault, criminal threatening, and interference with constitutional and civil rights” according to a local police spokesperson.

Hey guys I just had a homophobic man attack me in the Shaw’s north gate parking lot. This is his photo and license…

What do you get when you cross Donald Trump with Ursula? A poor deplorable troll.

JK Rowling & other famous writers signed a “free speech” letter. Trans writers were on the list too.