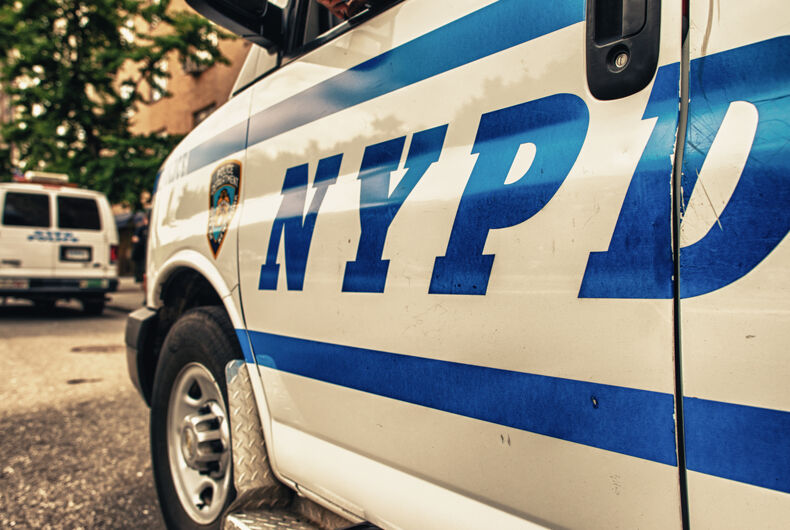 A man has ben arrested and charged with a hate crime assault for allegedly attacking two transgender women on St. Patrick’s Day in Queens, New York.

Police say that the man, 38-year-old Patrick O’Meara, verbally harassed two transgender women walking into a McDonald’s Friday afternoon before launching into a violent assault, according to NBC New York:

The women were approached by a man who called them gay slurs, threw one of them to the ground and punched her repeatedly, according to a criminal complaint. He left and came back with a cane, struck the other woman with the cane and punched her in the face, police said.

DNA Info reports that those slurs includes “bitches” and “faggots,” and that O’Meara allegedly repeated them while talking to police officers.

“Those bitches assaulted me, I’m pressing charges, fuck you, you fucking faggot,” he told police, according to the criminal complaint.

A witness said that the man had been yelling at people on the street before he focused in on the transgender women.

“He was harassing everybody that was walking by but when the trans women walked by he clearly was infuriated,” Maria Munoz said.

One woman suffered a broken ankle and was taken to the hospital. Both received lacerations during the attack.

At his Saturday arraignment, O’Meara’s bond was set at $5,000 and his next court date for March 31. According to police, he has been arrest eight times before, including for grand larceny auto and driving while intoxicated.

Bianey García, LGBTQ justice organizer at Make the Road New York, said that the group will continue to fight back against hate.

“We condemn this brutal hate attack and stand in solidarity with the survivors. We are horrified that transgender individuals in our community have suffered yet another hate attack,” she said in a statement. “Transgender immigrant women like me are part of the heart and soul of our Jackson Heights, and we will not stand idly by as our community faces discrimination and violence.”

A transgender woman was attacked on the NYC subway in February 2016, and in May 2016, a group of men assaulted a transgender woman in Brooklyn. The community is still reeling from the 2013 murder of Islan Nettles.

According to the U.S. Trans Survey, nearly 1 in 10 transgender people have been physically assaulted due to bias, close to half have been sexually assaulted, and more than 50 percent have experience intimate partner violence. At least seven transgender women have been killed so far this year.

If elected, Raymond Meza would be the first openly gay Latino congressman