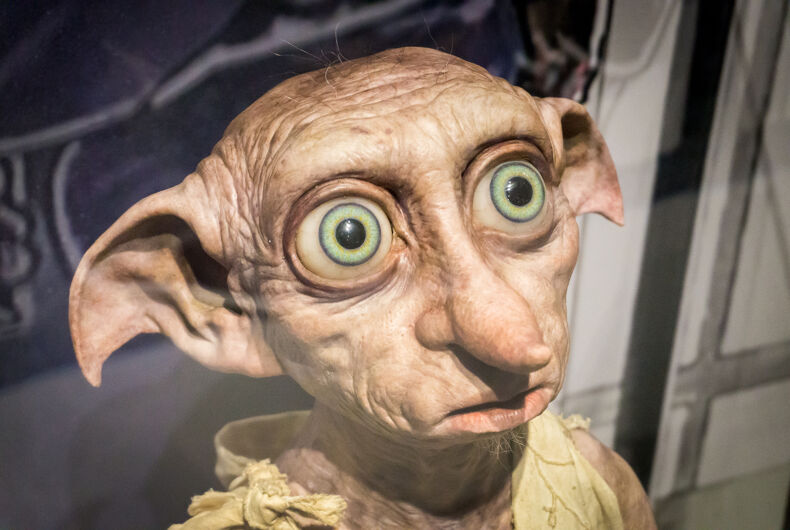 Dobby is a free elf.Photo: Shutterstock

The two largest websites for Harry Potter fans are cutting ties to the books’ creator, J.K. Rowling, after the author has continued her attacks on transgender people. The sites join a litany of actors from the movies based on the books who have condemned Rowling’s anti-trans statements.

Combined, The Leaky Cauldron and Mugglenet serve millions of Harry Potter devotees and the fan sites say that “distaste” for the author’s blatant transphobia has led them to decide that they won’t even link to her website or use her photo any longer.

“J.K. Rowling has chosen this time to loudly pronounce harmful and disproven beliefs about what it means to be a transgender person,” the sites said in a joint statement. “In addition to the distaste we feel for her choice to publish these statements during Pride Month—as well as during a global reckoning on racial injustice—we find the use of her influence and privilege to target marginalized people to be out of step with the message of acceptance and empowerment we find in her books and celebrated by the Harry Potter community.”

“Although it is difficult to speak out against someone whose work we have so long admired, it would be wrong not to use our platforms to counteract the harm she has caused,” they continued. “Our stance is firm: Transgender women are women. Transgender men are men. Non-binary people are non-binary. Intersex people exist and should not be forced to live in the binary.”

“We stand with Harry Potter fans in these communities, and while we don’t condone the mistreatment JKR has received for airing her opinions about transgender people, we must reject her beliefs.”

The sites say they will continue to cover books published by Rowling and her charitable foundation, but will no longer cover news about her personal life or anything that isn’t related to her personal life, listing “awards won, life achievements, tweets that are unrelated to the Wizarding World, charitable donations, legal issues, political commentary or opinions” as examples.

They say they will avoid using her name in headlines and article excerpts and will bury previous content about the author so it isn’t featured on the site. Similar policies, like avoiding photos or fan art of the author, will be implemented on their social media accounts.

“This marks the beginning of a renewed commitment to serving the Harry Potter community from a more conscious standpoint than we have done in the past,” they said in the statement, adding that their “one and only concern is to create a safe community where all feel welcome. This means continuing to be comprehensive in our coverage while making changes to ensure that this content is accessible to those who want to interact with it and not forced upon those who do not.”

Over the weekend, Rowling reacted by sending an string of 11 tweets comparing healthcare for transgender youth to anti-LGBTQ conversion therapy.

Days earlier, the author had liked a tweet that said banning the dangerous technique hurt children. The practice has been linked to suicide.