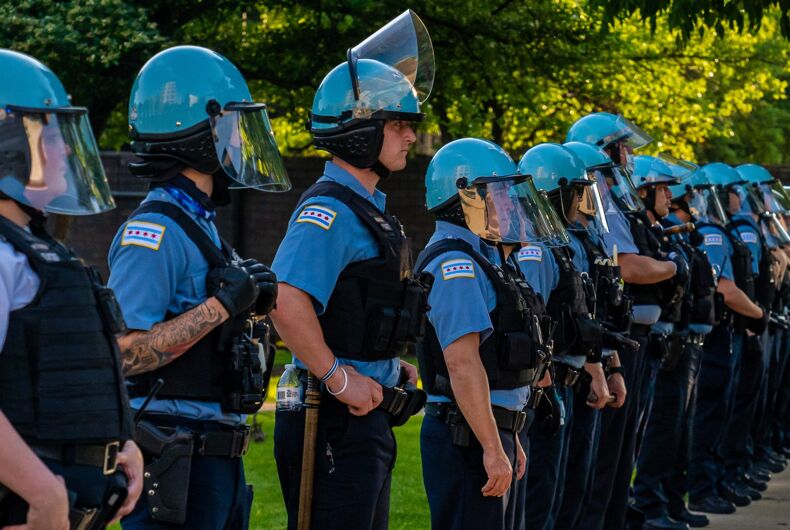 Chicago Mayor Lori Lightfoot won’t stand for homophobia in the ranks. The nation’s “highest-ranking” out mayor, it isn’t the first time she has to deal with anti-gay remarks either.

After an unidentified Chicago cop was filmed hurling sexist and anti-gay slurs at a protestor, Lightfoot has vowed to find out who he is and fire him. The unknown officer wears a Chicago Police Department (CPD) uniform.

The video shows the foul-mouthed cop walking past a group of protestors, dragging a sign. Shouts from the crowd indicate the officer had taken it from another demonstrator who “didn’t do anything.” As the cop passes, someone throws a traffic cone that does not hit the officer.

“Bitch!” the cop screams as he walks back to the crowd. “Wait until I turn my back, you fucking f****t!”

The group of demonstrators erupts in anger as the cop stalks off. The other officers on the scene do not try to intervene or calm down the situation.

“If you are one of those officers who choose to do those things, or to tape over their badges, or to turn off their body-worn cameras — all things that violate very clear directives of the Chicago Police Department — we will find you, we will identify you, and we will strip you of your police powers. Period.”

The CPD has launched an investigation into the incident and also condemned the officer’s actions, saying after he is identified he will face disciplinary action.

Earlier this year, Lightfoot rebuked the City Council after a councilor made homophobic comments during a debate on whether to reserve come city contracts for LGBTQ-owned businesses.

After the discussion, Lightfoot rebuked the Council for the “disturbing” comments and their “offensive nature.” She mentioned the shame she “bears to this day” for staying silent when hearing offensive and harmful statements as a black child and a young lesbian. As an adult and mayor, she said, it was her obligation to “stay silent no more.”

White gays who’ve been silent so far, he said “wait till I turn my back, you f*ckin f****t”. If it takes you till this to be angry, shame on you, but hey come join. pic.twitter.com/73QszndmAw

Police misconduct, from harming residents to covering badges to using homophobic language, will not be tolerated. Period. If you believe a police officer has committed an act of misconduct, please call 311 to report it. pic.twitter.com/hvi4UUZuOh

A complaint of misconduct has been received regarding this incident, and we immediately opened an investigation, which is now underway. pic.twitter.com/AmBZezMEWS

Pride in Pictures: Sharing the joy of pride