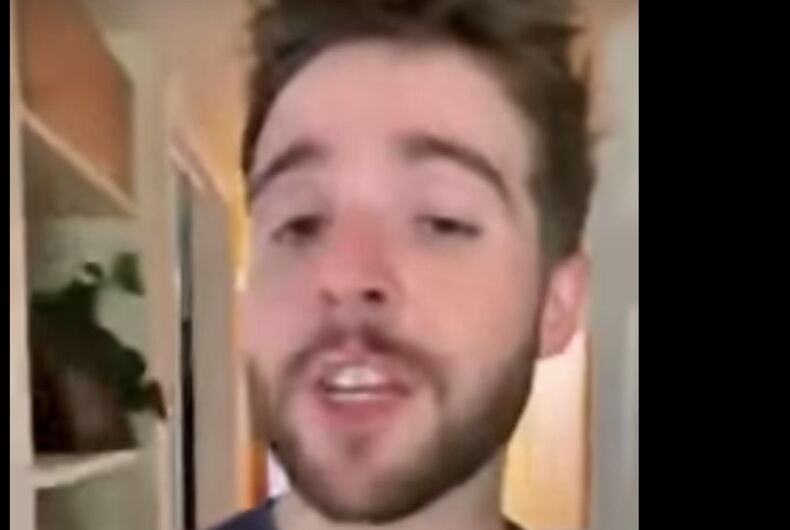 Andrew Joseph Duffer — a gay guy in a “happy hooker” t-shirt living in a northeast Texas town (population less than 5,000) where “racism and homophobia run rampant” — has posted a charmingly angry five-minute video rant where he explains the judgmental and self-serving way his supposedly Christian townsfolk treat Black and gay people while supporting President Donald Trump.

“Gay people, same for you,” he continues. “If your parents are popular enough, well established enough, and you’ve been seen at the church at least once, then you won’t be destined for the Lake of Fire. All these years I thought it was the blood of Christ that brought salvation but in this instance, it was my daddy’s ability to do the town’s people’s tax returns. Who would have thought?”

“Keep your seatbelts fastened,” he goes on, “because we are now reaching the turbulent part of this video and I guaran-damn-tee you some panties are going to get in a wad.”

He then says townspeople have been reaching out to him to say that they love and support him, and they also support Trump, but they don’t agree with everything he says. They usually justify this by saying that they think he’s good for the economy, for their small businesses, wants them to have assault rifles and does a good job “keeping the illegals out.”

“You sound ignorant,” Duffer continues later in the video. “You can’t sit there and tell your black friends, your immigrant friends, your Muslim friends, your Hispanic friends, your LGBTQ friends that you love and support them but you’re supporting Trump, because we’ve got Mexicans in cages, we have got black people getting killed in the street, we’ve got gays being stripped of their rights left and right I mean every day I wake up Donald Trump is doing something to attack these people. He is not good for this country and you just, you sound dumb. And I need you to stop.”

A Chicago cop called a protestor a “f****t.” The mayor is a lesbian & she’s not having it.