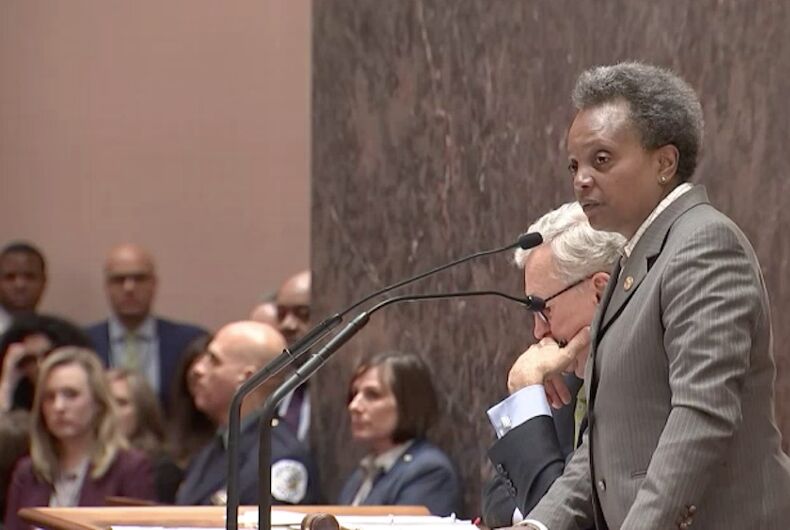 On Wednesday, the Chicago City Council decided to study the possibility of reserving some municipal contracts for LGBTQ-owned businesses, just as they do for businesses owned by women and people of color. However, the city’s lesbian Mayor Lori Lightfoot criticized the Council for some homophobic comments made during the discussion.

During the Council meeting, Alderman Walter Burnett Jr. said he worried some business owners might commit fraud by pretending to be LGBTQ just to win a city contract. To make his point, he referenced a similar scam presented in the 2007 Adam Sandler and Kevin James film I Now Pronounce You Chuck & Larry in which two straight firemen marry each other for a financial benefit.

Burnett said that the LGBTQ business owners are likely white men and don’t need additional help when the city should be supporting people of color more.

After the discussion, Lightfoot rebuked the Council for the “disturbing” comments and their “offensive nature.” She mentioned the shame she “bears to this day” for staying silent when hearing offensive and harmful statements as a black child and a young lesbian. As an adult and mayor, she said, it was her obligation to “stay silent no more.”

Our children are watching. Please choose your words carefully in this body. We are leaders. People look to us. They will take our word seriously, as they should, and I will just say be careful in how you express yourself. Of course, ask questions, that’s what a deliberative body does, but do it in a way that doesn’t demonize or victimize anyone else.

Lightfoot also said she was disturbed that a Councilmember from the black community would disparage the gay community and added that the “pie” of city contracts is large enough for no one to worry about disadvantaging one community to favor another.

The following night at a fundraiser for state representative candidate Jonathan “Yoni” Pizer, Lightfoot referenced the Council meeting while discussing the importance of electing gay and lesbian political candidates.

She said, “We have to have representation of people who understand our lived experience. Yesterday in City Council was a perfect example of why we can’t rest on our laurels. The battle in the war is not over. We still have ignorance and bigotry that wants to push us back in the shadows.”