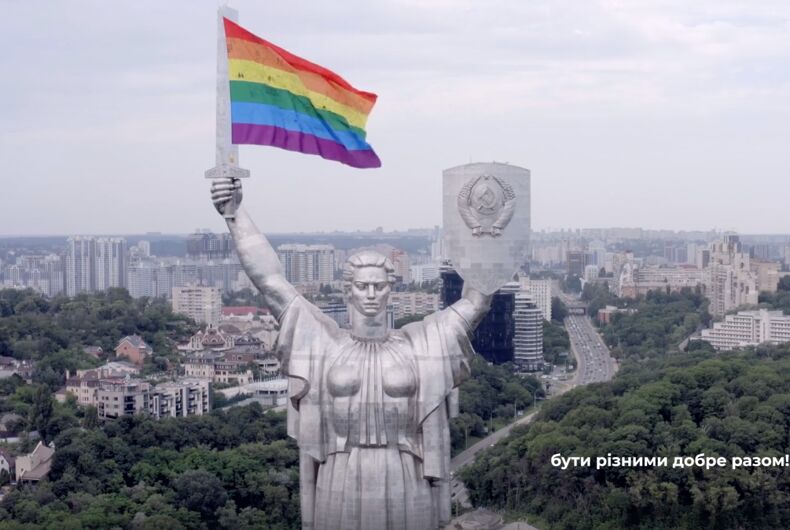 The "Motherland" statue in Kyiv sports a rainbow flag for PridePhoto: Facebook/screenshot

Ukrainian LGBTQ activists used a drone to hoist a giant rainbow flag and attach it to the “Motherland” statue in Kyiv. The sculpture is venerated in the country and stands slightly higher than the Statue of Liberty.

While the stunt has been met with blowback in the conservative country, the government was powerless to stop them.

Related: Trump’s Ukraine scandal is only going to embolden Putin and his anti-gay thugs

“Drone flights were carried out under the current legislation and according to the rules of the State Service,” according to Dronarium Ukraine, the company that arranged the flight.

“We are against the manifestation of aggression against the LGBT community, which we consider to be from the Middle Ages,” the company added on Facebook.

While homosexuality is legal in Ukraine, the country is not welcoming to LGBTQ people. In 2017, a small group of activists who were trying to draw attention to the rampant anti-LGBTQ sentiments was violently attacked by thugs who burned their rainbow flag.

When police tried to intervene, the gang turned on the officers, sending four of them to the hospital.

Earlier this year, Patriarch Filaret went on TV in Ukraine and blamed coronavirus on marriage equality. Filaret is the founder and primate of the Ukrainian Orthodox Church, one of the biggest branches of Christianity in the country that claims it has 15 million followers in the nation of 42 million people.

Activists posted footage online of the flag being hoisted onto the statue with the hashtag #momwillunderstandandsupport.