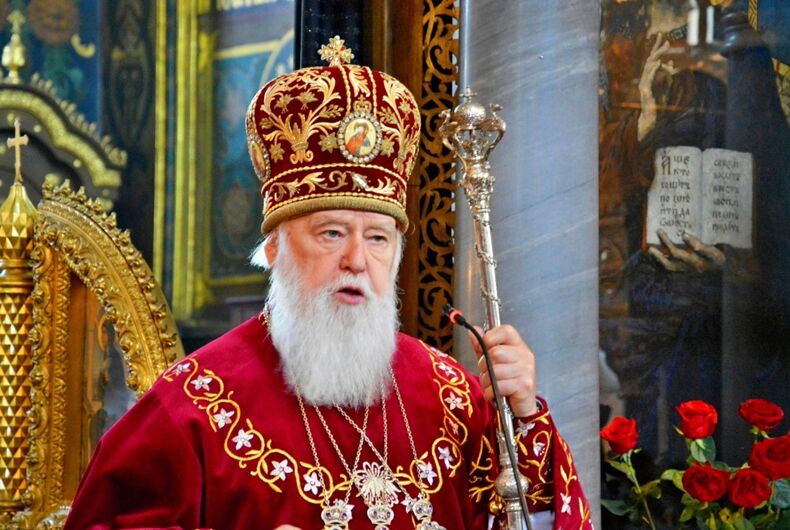 An LGBTQ organization is suing a prominent religious leader for blaming marriage equality for coronavirus.

Last month, Patriarch Filaret went on TV in Ukraine and blamed coronavirus on marriage equality. Filaret is the founder and primate of the Ukrainian Orthodox Church, one of the biggest branches of Christianity in the country that claims it has 15 million followers in the nation of 42 million people.

Ukraine’s constitution defines marriage as between one man and one woman, too.

Human rights advocates called out the statements, which they said were “dangerous” because blaming an epidemic on a disempowered minority that is already disproportionately affected by hatred and violence could get people hurt.

“Such statements,” said Maria Guryeva of Amnesty International Ukraine, “are very harmful because they could lead to increased attacks, aggression, discrimination, and acceptance of violence against certain groups.”

Now the LGBTQ organization Insight is taking legal action against Filaret, accusing him of disseminating false information on television.

“Our aim is to show people that there is no longer place for such statements from church leaders in Ukraine,” Insight’s leader Olena Shevchenko told Reuters.

She said that the group is asking for an apology and for the TV channel to run a correction.

“We just want them to be more responsible the next time,” Shevchenko said.

It’s unlikely the church will cave in so easily. In a statement, the Orthodox Church of the Kiev Patriarchate defended Filaret’s statements.

“As the head of the church and as a man, the Patriarch has the freedom to express his views, which are based on morality,” the statement said.

Hate speech against LGBTQ people is not illegal in Ukraine, where LGBTQ people have few legal protections. The country passed a law that bans job discrimination on the basis of gender identity and sexual orientation, but that was only passed because it was required for Ukraine to join Europe’s Schengen Area.

In 2018, the country refused to accept the Istanbul Convention on domestic violence and hate crimes because it said that anti-LGBTQ violence is a human rights violation.

“I agree that we must accept many European values,” said Member of Parliament Yuriy Solovey at the time, “but certainly not the ones that violate the bases of Christianity.”

The religious right has a new coronavirus concern: people are touching their no-no parts