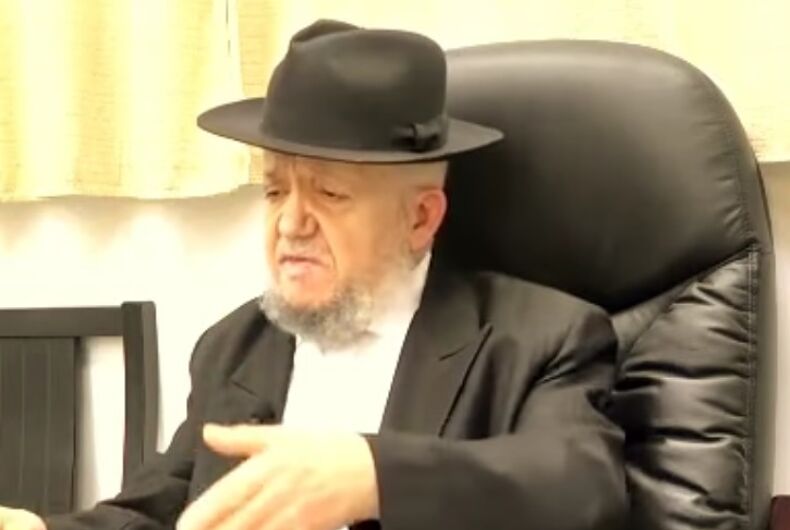 A rabbi has come under fire for saying that the current outbreak of the coronavirus COVID-19 was caused by LGBTQ Pride parades.

Rabbi Meir Mazuz is an influential rabbi in Israel and the head of the Kiseh Rahamim yeshiva in Bnei Brak, and he used to be the spiritual leader of the conservative Yachad Party.

While speaking at the yeshiva this past Saturday, Mazuz started to talk about Pride parades, calling them “a parade against nature,” according to the newspaper Israel Hayom as reported in the Times of Israel.

“And when someone goes against nature, the one who created nature takes revenge on him.”

Mazuz said that the coronavirus is the “revenge” and a problem that all countries are dealing with “except for the Arab countries that don’t have this evil inclination.”

He reportedly said that there has only been one case of the coronavirus in Arab countries, which is far from true. The tiny nation of Bahrain alone has had 95 confirmed cases.

Mazuz said that Iran, which is one of the countries with the most cases of the coronavirus, is being punished for “their hatred of Israel.” The country is notoriously anti-gay and does not allow any Pride parades.

He also claimed that Israel would be “protected” from the virus. Johns Hopkins University data shows that Israel has had 39 cases so far.

His comments have been condemned by the Anti-Defamation League, an international non-profit dedicated to fighting anti-Semitism and extremism.

“It is regrettable that in times like these when the whole world comes together to eradicate coronavirus, Rabbi Mazuz finds it appropriate to blame the virus’s outbreak on the LGBTQ community,” the ADL said in a statement. “We harshly condemn his statements and urge him to apologize.”

This isn’t the first time Mazuz has blamed tragedies on Pride parades. In 2015, he said that two Israeli people who were killed in a Palestinian attack were actually killed because there was a Pride parade in Jerusalem.

“We must avoid acts of Sodom and Gomorrah that have multiplied over the past year.”