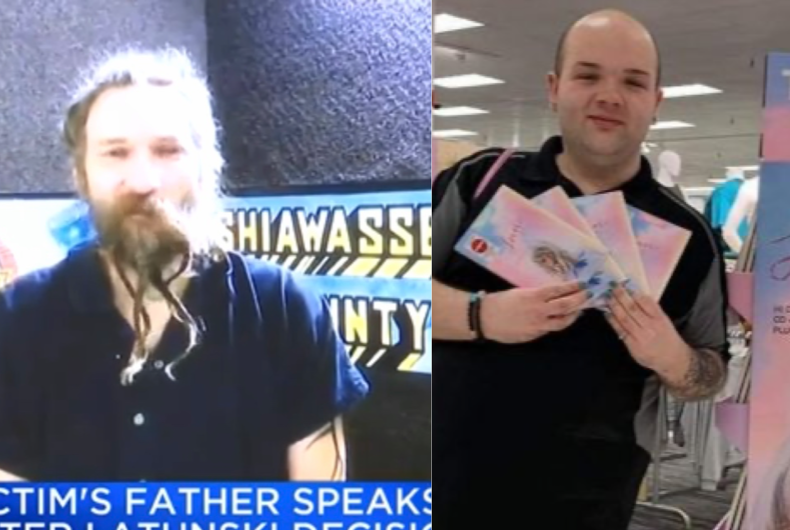 Attorneys for Mark D. Latunski, the man accused of killing and cannibalizing a man he met on Grindr last Christmas, have confirmed that he has been determined unfit to stand trial.

Kevin Bacon, a 25 year-old hairstylist and college student, went missing after Christmas Eve after telling his roommate he was meeting someone on the gay social network. Police found his body in Latunski’s home on December 28, his corpse mutilated and parts of his body had been eaten.

Related: A man who threatened to kill gay people in mass shooting was arrested

A subsequent outpouring of support and mourning came from celebrities and Bacon’s community. The actor Kevin Bacon shared a tribute, while makeup artist Jeffree Star pledged $20,000 toward his funeral proceedings.

“His life was taken from him much too soon,” actor Bacon wrote on New Year’s Day. Star wrote on Twitter, “I’m devastated to hear of the passing of someone from Michigan who lived their life fearlessly and was taken too soon.”

Latunski was subsequently arrested and confessed to killing Bacon, although he claimed at his arraignment that he was Edgar Thomas Hill, his uncle’s name. Latunski also allegedly believes he is part of “royal Welsh Thomas clan.”

“What that means is everything is put on hold in regards to the trial while he gets treatment,” said Corwin. That includes counseling, medications, and assessments.

Latunski’s life prior to his arrest was found to be chaotic as well. His estranged husband, Jamie Arnold, said he left Latunski because he could not keep him on his medication. “I had to get out of there. I knew it was a dangerous situation for me to be in,” Arnold told local media. “To my knowledge, I couldn’t force him to see a therapist or take medication.”

Latunski was also accused of kidnapping two of his four children in 2013. Records indicate he “took the kids to a hotel and refused to return them to their mother,” his ex-wife Emily Latunski.

Corwin told the Detroit Free Press that “if Latunski is ever deemed competent again, the charges could be brought back.”

The victim’s father, Karl Bacon, believes this is all an act on Latunski’s part. “I have my doubts…he’s played this card in the past,” he said to press outside the courtroom. “Either way, I’ll be here, waiting for him.”

A week before the competency hearing, Latunski was found unresponsive in his county jail cell. He was transported to a local hospital before he was returned to jail. While he was reportedly not eating enough food, corrections officials would not call it a hunger strike and it remains unclear what led to the hospitalization.

Meanwhile, the house that Latunski lived and killed Bacon in was foreclosed and sold at a courthouse auction for over $100,000.