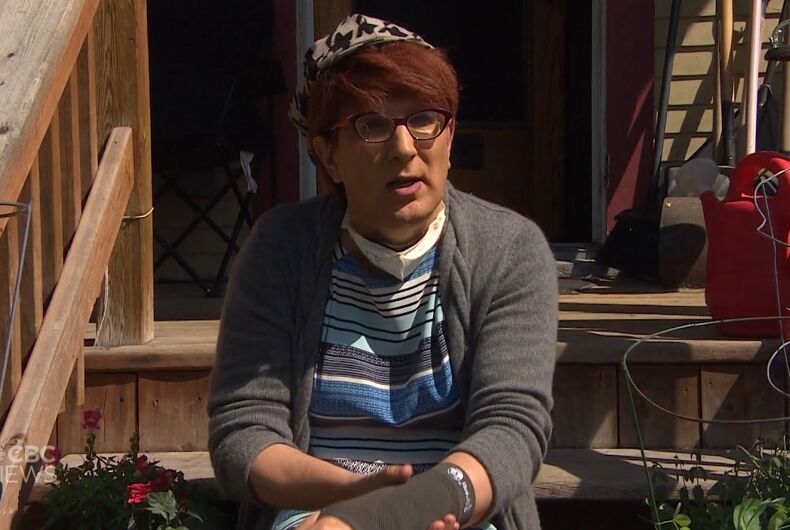 A transgender woman says that she is still recovering from her injuries she suffered when two drunk cisgender women “karate chopped” her for using a women’s restroom.

Lara Rae, 56, was at a mall in downtown Winnipeg, Canada, when she went to the restroom. But as she tried to leave, two women she didn’t know were blocking the door.

“They were both highly intoxicated, and one of them started screaming and abusing and misgendering me,” Rae told CBC News.

Rae said that she took out her driver’s license to show the women that she is a woman in an attempt to end the conflict, but as she was showing her ID, one of the women attacked her.

“She basically karate chopped my hand,” Rae said, resulting in a sprained wrist.

Rae said that the women called to a man they knew who was outside of the restroom and asked him to come over and “beat up” Rae.

“He gets in my face, and you know, tries to intimidate me and stare me down,” she said. “For whatever reason, I kind of see a change in his eyes and he cuts his losses and he just turns and leaves.”

She said that mall security came, but one of the women continued to scream at her and misgender her while the security officers did nothing.

“I just had to stand there and listen to her continue to scream and not one of them thought, ‘Maybe you should shut up and stop misgendering this woman and further traumatizing her,’ because it doesn’t even enter their heads,” she said.

The alleged assailants then left the mall and the police were called.

Rae has to wear a supportive sleeve for her injury and had to take time off work.

In a statement, the mall’s management said that they couldn’t legally detain the alleged assailants, but they sent security camera footage of the incident to the police.

“Based on this conversation and subsequent feedback from the LGBTQ community, we are taking recommended and immediate steps to better protect and enhance LGBTQ safety while at the mall,” said mall general manager Dave Stone. “This includes signage, washroom signage, and sensitivity training.”

Rae said that the incident is a sign of a bigger problem and she wants more people to be educated about LGBTQ people.

“I want to see an education system that allows people to understand that sexual minorities are just regular people — just like everybody else,” she said.

“The idea that a child can’t hear about transgender people is so offensive, obnoxious, and dangerous to our community.”

“We are just treated like garbage, my community. I’m sick of it,” she said.