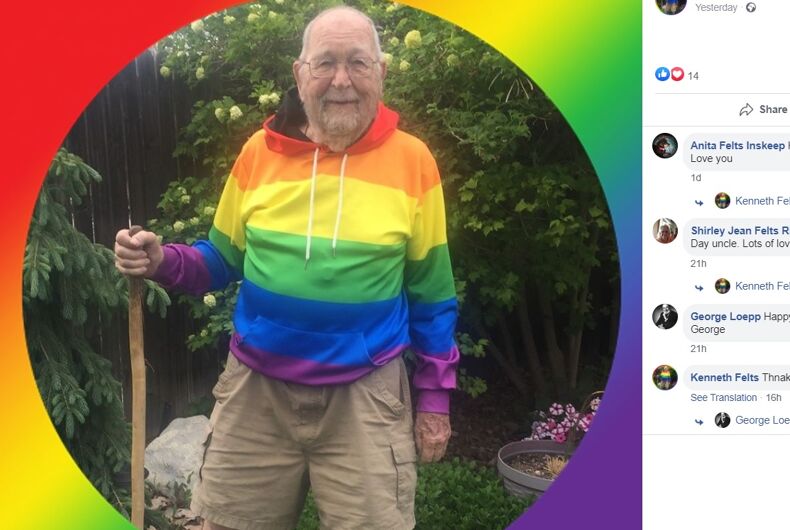 After almost a century in the closet, Colorado resident Kenneth Felts came out to family and friends because self-isolation brought back memories of the love of his life: a man named Phillip.

Felts said that he started writing his life story while isolated in his home due to the coronavirus pandemic. That’s when he started thinking about Phillip, the man he fell in love with back in the 1950s.

Felts ultimately left Phillip in order to marry a woman and live his life in the closet. He had one daughter with his wife and they later divorced.

“Coming out in the 50s, 60s, and 70s was horrendous,” Felts said. “That was part of the reason I didn’t ever consider coming out.”

“I guess I didn’t have the courage to face society at that time, so I just went ahead and buried it.”

A few weeks ago, he was talking to his daughter – who is a lesbian –  and he told her about Phillip. It was the first time he ever mentioned that he is gay.

Felts then came out to his whole family in emails. He explained that he felt like he had two personalities living in him: “Ken,” a straight man; and “Larry,” a gay man.

He said that he got lots of positive messages of support even though he was afraid of how people would react.

“I’ve been in the closet all my life, deep in the closet,” he said. “Opening that door at the front, I had great trepidation as to what people would say. I was very concerned because I needed people and I couldn’t stand the thought of losing them just because I decided to finally be who I really was.”

Felts updated his Facebook profile picture to one with him in a rainbow hoodie. He participated in a 5K to raise money for Denver Pride and he attends a virtual LGBTQ senior coffee group in his area.

“He just really seemed to take it and run with it,” his daughter’s wife Tracie said. “He seems to be making up for lost time and really is owning it, which is fantastic.”

Felts said that he has tried to track down Phillip, but he hasn’t been successful.