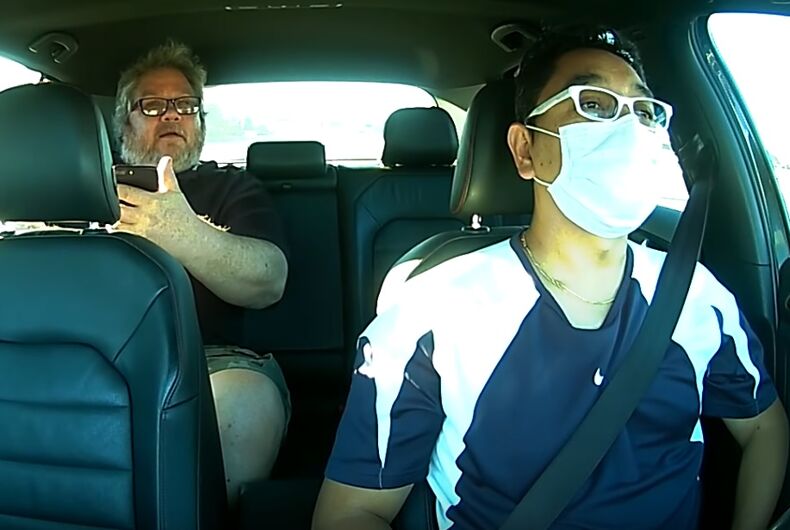 Edgar, wearing a mask, with Richard in the back of the carPhoto: YouTube screenshot

A white man who got so upset at being asked to wear a mask in a Lyft driver’s car ended up going on a racist and homophobic rant and was later banned by the service.

In a video recorded on May 28 by the driver Edgar, the man who identified himself as Richard entered the car without a mask. Edgar asked Richard to put on a mask or lift his shirt over his mouth and Richard refused.

“Do you believe in that s**t?” Richard said incredulously, referring to either coronavirus prevention measures or coronavirus itself.

“Yes, I do,” Edgar responded, “because I have family that is sick of that.”

Richard made some comments about “the government” and said that he had “never heard of someone asking me [to wear] a mask.”

Edgar asked Richard to get out of the car, which is when Richard lost it, calling Edgar a “a candy-a** fa***t with white glasses” and “a f*****g we***ck,” which is an anti-latino slur.

“You ever take English class?” Richard asked, mocking Edgar’s accent. “Where are you from, boy?”

“I could f**cking crush your skull right now.”

Edgar threatened to call the police to get Richard out of his car, and Richard left, saying that he will complain about Edgar to Lyft.

“The behavior shown by the rider in this video is despicable and has no place on the Lyft platform,” the app said in a statement. “Lyft is committed to maintaining an inclusive and welcoming community, and discrimination is not tolerated.”

They said that Richard has been banned from the app and they are “working with the driver to ensure he’s OK,” according to TMZ.