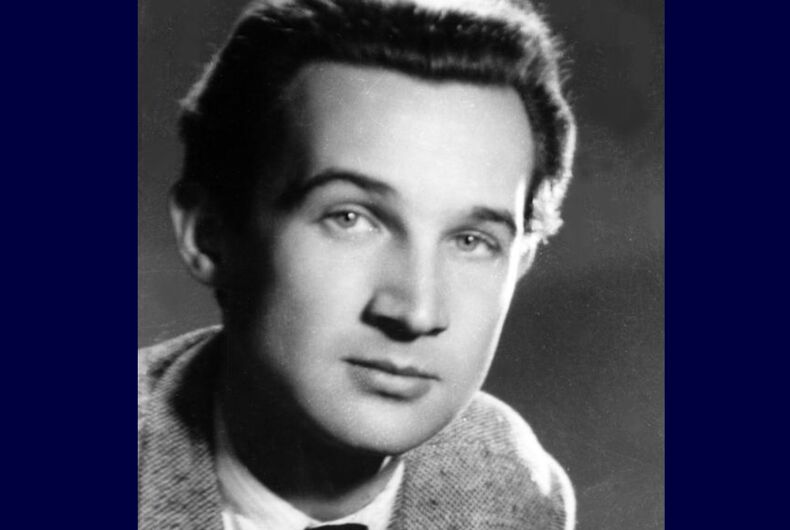 A Polish theater legend just came out as gay at 100-years-old.

Witold Sadowy, who was born about a year after the end of World War I, talked about his sexuality with TVP Kultura.

Related: A third of Poland has declared itself “LGBTQ-free zones”

“I’m proud of being an honest person,” he said. “I am single, and I had no children, something to regret.”

“But I was born different. I’m gay. Now I have said it all, like in confession.”

Sadowy started acting in 1945 and appeared at many of Warsaw’s biggest theaters, and he retired in 1989 after starring in a Zygmunt Nowakowski play. He was awarded the Commander’s Cross of the Order of Polonia Restituta for his “outstanding service” to Polish culture and was named a “distinguished member” of the Association of Polish Stage Artists.

He also appeared in several films in his career, wrote five books on theater and memoirs, and was a theater columnist.

And now he’s the oldest living actor in Poland.

“For me the most important is the survival of the truth,” Sadowy said in his coming out interview.

It’s appropriate that survival is the word Sadowy went to. He survived two world wars, Stalinist Poland, several revolts, and the fall of communism. He also survived being gay for a literal century in a country where a vast majority of people still say they believe homosexuality “is morally unacceptable” in recent polls.

The Polish theater magazine Replika congratulated him on coming out. Considering the growing antipathy toward LGBTQ people in Poland – one poll found that men under 40 believe that LGBTQ people, not climate change or a possible recession, are the biggest threat facing the country – his coming out could make a difference.