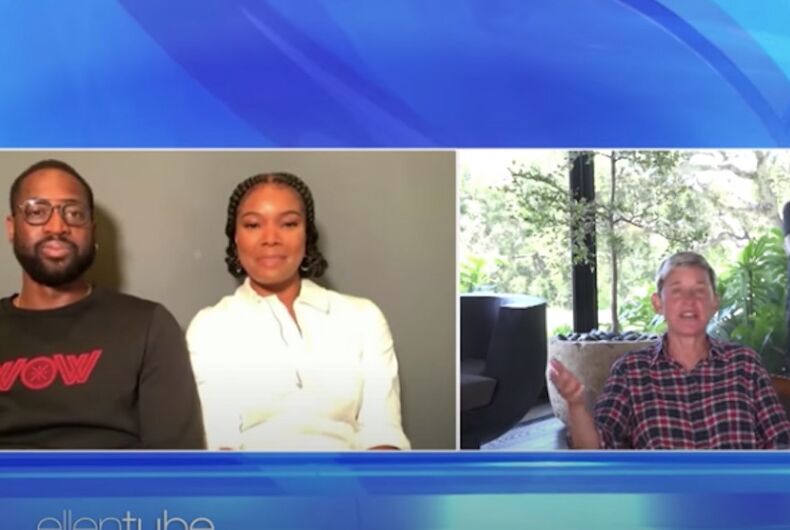 Ellen DeGeneres recently spoke to actress Gabrielle Union and retired NBA player Dwyane Wade about raising their 12-year-old transgender daughter Zaya. During their conversation, Union highlighted the rejection LGBTQ kids often face from their families and Wade discussed the queerphobia he had to confront in being proud of Zaya.

Union appeared on The Ellen Show to discuss Welcome to the Party, her recently published children’s book inspired by the birth of her youngest daughter, Kaavia James Union Wade, in November 2018. The book is a sing-song poem celebrating the arrival of a new child into a family.

“As an LGBT+ ally, I see a lot of my friends have chosen families, and nobody really celebrates them,” Union told Ellen.

“I want to be able to celebrate all of our families, no matter how they’re created. And just letting everyone know that they are welcome at this party called life. We wanted to start the little, little guys off knowing that they’re welcome and they’re celebrated.”

Ellen responded, “I know this is silly to say because, you know, who doesn’t love their children unconditionally? But I guess a lot of people don’t. But it’s so amazing how supportive you’ve both been.”

“Yeah,” Union replied. “I mean, to us, it’s a little odd to be, to get, you know, any kind of recognition for doing what, you know, you’re supposed to do, which is love and accept and embrace your kids. But unfortunately, there are so many people who just don’t. They just don’t.”

“And so many people who really truly feel like their kids are disposable,” Union continued. “If they’re not perfect images of them, they’re not interested. And it’s heartbreaking. So for us, we are just doing what’s natural to us and loving her. We just want happy, healthy, compassionate kids. So we try to lead with that.”

Ellen replied, “It is unfortunate that a lot of people have children thinking they can mold them and make them who they want them to be and have a certain idea of what they are supposed to turn out like. But they all turn out different.”

Wade admitted that he and his family struggled with how much to share about their young daughter, knowing that they’d receive backlash for letting her live authentically.

“We struggled with that, because she’s 12, and what people would say about a 12-year-old making a decision about her life,” Wade said. “But we know our child, and it’s our job as parents to find the most information we can.

He continued, “We’ve reached out to people and researched as many things as we can to try to help, not only our family but other people in this journey and along the way.”

Related: An amazing dad needed a good swimsuit for his trans daughter. So he invented it himself.

Wade also said that he himself had expressed queerphobic thoughts in the past and had to put his personal hopes and fears to the side while accepting his daughter for who she is.

“I’ve been a person in a locker room that has been a part of the conversation that has said the wrong phrases and the wrong words myself.… It was a process for us to sit down with our daughter and find out who she is and what she likes, and not put something on her – because as parents, we put our hopes and our fears on our kids.

“With Zaya, we decided to listen to her. She’s leading us along this journey. She’s known it for nine years,” he said. “She’s known since she was three years old. Along the way, we’ve asked questions and we’ve learned. But she’s known.”

Union and Wade both attended Pride with Zaya in June 2019 and Wade stood up for Zaya when Instagram users criticized her for wearing a crop-top and painted nails in early December 2019. That same month, he discussed the importance of supporting queer children on a podcast in December 2019. The couple also joined Zaya on her red carpet debut for an event celebrating black LGBTQ children in March 2020.

Here’s a video of Ellen DeGeneres’ chat with Gabrielle Union and Dwayne Wade:

A group of gay men threw a days-long “rona rave” in NYC. Some of them are healthcare workers.