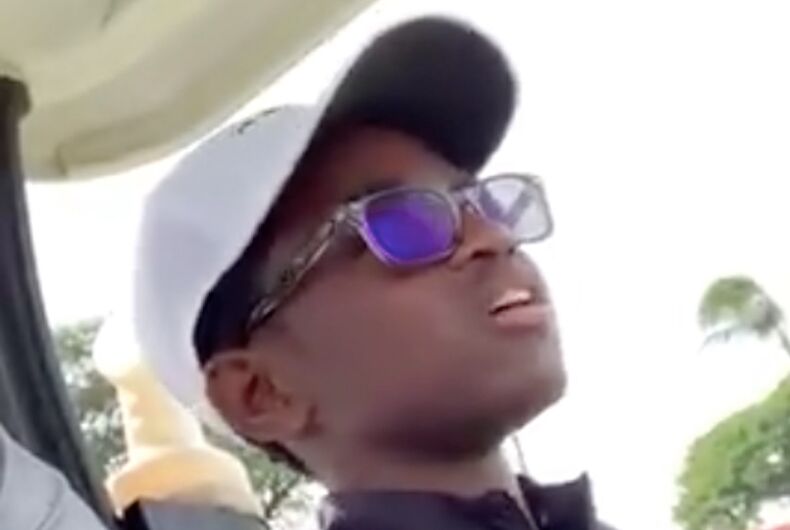 This weekend, Zaya Wade, the 12-year-old transgender daughter of NBA player Dwyane Wade and actress Gabrielle Union, made her first red carpet appearance since her proud father announced that she is transitioning.

Her parents coordinated outfits with her, dressed in black and white suits with magenta and green highlights, two colors that Zaya wore on her suit too.

Related: Arena full of basketball fans bursts into applause when Zaya Wade is shown on the jumbotron

Zaya and her family were on the red carpet for the Better Brothers Los Angeles sixth annual Truth Awards, an awards ceremony that recognizes “the accomplishments of the black LGBTQ community and its allies” and awards LGBTQ youth scholarships.

The family wore custom suits from RichFresh, took questions on the red carpet, and later shared stunning pictures from the event on Instagram.

Big night at the #TruthAwards2020 to celebrate our friends @jasonbolden @adair_curtis receiving the Business Leadership Award. We are incredibly proud of them and grateful for their presence, love & light in ourselves. @richfresh kept us FRESHHHHH in custom suits and @lorraineschwartz laced us with gorgeous jewels for the special occasion. It was an EPIC night filled with so much love & a real sense of community. It was important for Zaya to be a part of such a beautiful night & reminding her of all the love & support she has. We were moved to tears so many times throughout the night. So much gratitude ❤💜🖤

Zaya how does that custom @richfresh feel??? Last night was a dope experience for our family. Thank you to @betterbrothersla and the #truthawards for recognizing our good friends @jasonbolden @adair_curtis with the Bussiness Leadership Award. The Truth Awards was created to recognize and highlight the accomplishments of the Black LGBTQ+ community and its allies. In doing so, they increase the awareness of there contributions to Society, Popular Culture and the Arts, and help refocus the lens through which they are seen. The Truth Awards also provides funding for scholarships that supports educational opportunities for youth in the LGBTQ+ community! ✊🏾🖤

Everyone allow her to re-introduce herself her name is Zaya Wade! Last night was Zaya’s first red carpet and we couldn’t have been prouder of how she handled the questions that were asked of her. She has emerged as one of the young faces and voices for the LGBTQ+ community. #truthawards

On one Instagram post, Union wrote, “It was an EPIC night filled with so much love & a real sense of community. It was important for Zaya to be a part of such a beautiful night & reminding her of all the love & support she has.”

Zaya’s parents have supported her as she has come to understand her identity. They both attended Pride with Zaya in June 2019 and Zaya’s father stood up for her when Instagram users criticized her for wearing a crop-top and painted nails in early December 2019. That same month, he discussed the importance of supporting queer children on a podcast in December 2019.

Wade first discussed Zaya’s transition on the Ellen Degeneres Show, where he said, “We are proud parents of a child in the LGBTQ+ community, and we’re proud allies as well, and we take our role and responsibility as parents very seriously.”

Zaya’s mother and brother have been supportive as well. Union regularly shares social media posts praising her daughter and thanking others for their support.

In a February 12, 2020 Instagram post, Zaya’s brother Zaire wrote, “I’ve told you that I would lay my life down to make sure you are 10 toes down and happy on this earth. I don’t care what they think, Z. You are my best friend, and I love you, kid.”