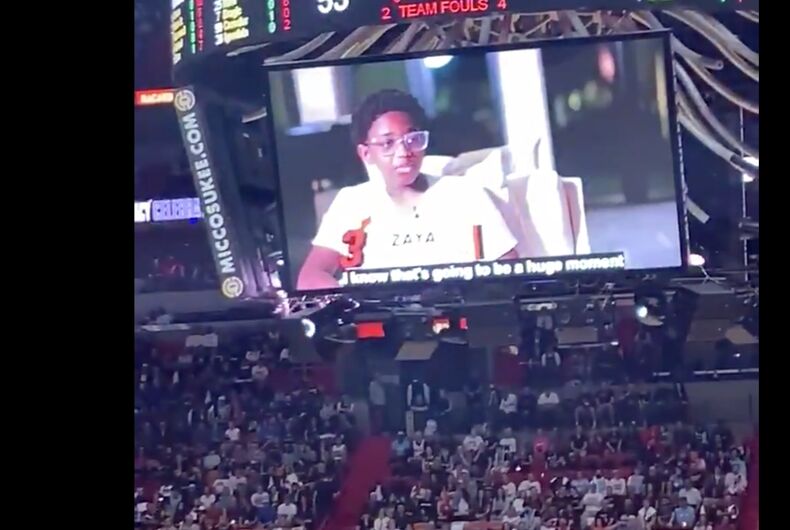 Zaya Wade on the Jumbotron as fans cheerPhoto: Screenshot

In a video posted to Twitter, Zaya can be seen on the big screen during her father’s retirement ceremony discussing her excitement to see his jersey hung up in the arena soon.

Related: Dwyane Wade’s transgender daughter knew she was a girl when she was 3 years old

The moment the screen switches from Wade’s wife (and Zaya’s stepmother), Gabrielle Union, to Zaya, the crowd begins to roar with applause, presumably in celebration of Zaya’s recent declaration of her identity.

Applause for Zaya Wade during a tribute to her father @5ReasonsSports pic.twitter.com/fmxRBktIOr

Wade and Union have made waves across the Internet for their open support of Zaya.

Wade first discussed Zaya’s coming out on The Ellen Show, where he said, “We are proud parents of a child in the LGBTQ+ community, and we’re proud allies as well, and we take our role and responsibility as parents very seriously.”

Zaya is a remarkable young woman with such an insight on life. Bruce, I, and our entire team are inspired by her. We’re sending all our love and support. Thank you for being such incredible parents—I know that’s the future you want for all our kids.

Hey, Zaya! We are all so proud of you. Your strength, intelligence, and conscientious worldview is impressive – thank you for being you!

Of course, Zaya’s coming out was met with hostility from many on Twitter as well.

Especially in the sports community, homophobia and transphobia remain a huge problem, which is why Wade’s support has felt so significant.

Heat Nation even reported that Zaya came out “much to the dismay of NBA fans across the globe.”

Still, Wade and Union have remained fierce advocates for 12-year-old Zaya–and this moment of applause seems to indicate that even in the world of sports, they are not alone in supporting her.