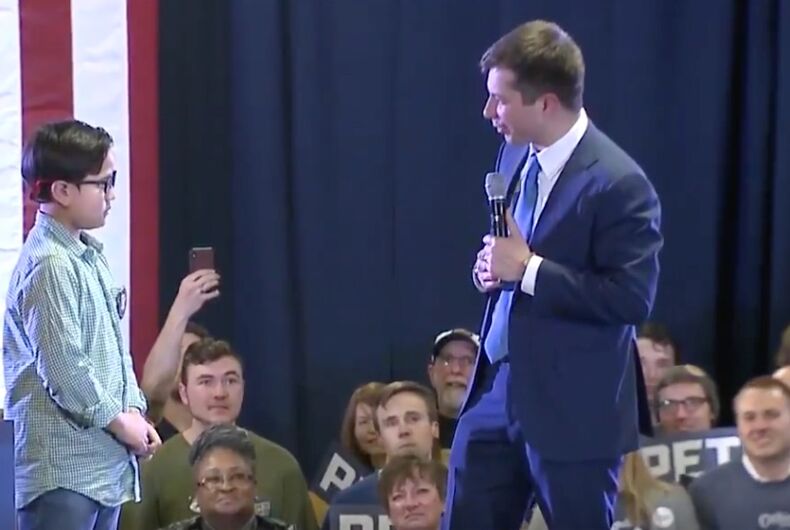 Out Democratic presidential candidate Pete Buttigieg had a response when a 9-year-old boy asked for his help coming out. Standing on stage with the mayor, the touching moment has moved the nation.

“It was exciting, and I felt really happy,” Zachary Ro told the Colorado Sun after the rally ended. “I was glad I was able to tell everyone in the audience that I’m gay.”

“Thank you for being so brave,” Ro asked while standing on stage with the candidate. “Would you help me tell the world I’m gay, too? I want to be brave like you.”

Ro’s question was read by Colorado Secretary of State Jena Griswold. It was drawn out of a bowl at random.

“I don’t think you need a lot of advice from me on bravery, you seem pretty strong,” Buttigieg started.

“It took me a long time to figure out how to tell even my best friend that I was gay, let alone go out there and tell the world. And to see you willing to come to terms with you who you are in a room full of thousands of people you never met, that’s really something,” he said.

“Let me tell you a couple things that might be useful. The first thing is that it won’t always be easy, but that’s okay because you know who you are and that’s really important because when you know who you are you have a center of gravity that can hold you together when all kinds of chaos is happening around you.”

The crowd erupted into chants of “love is love” as young Ro was led off stage.

Powerful moment (better audio): 9 year old Zachary Ro of Lone Tree asks @PeteButtigieg how he can be brave and tell people he is gay too pic.twitter.com/1aUbYM8cDM