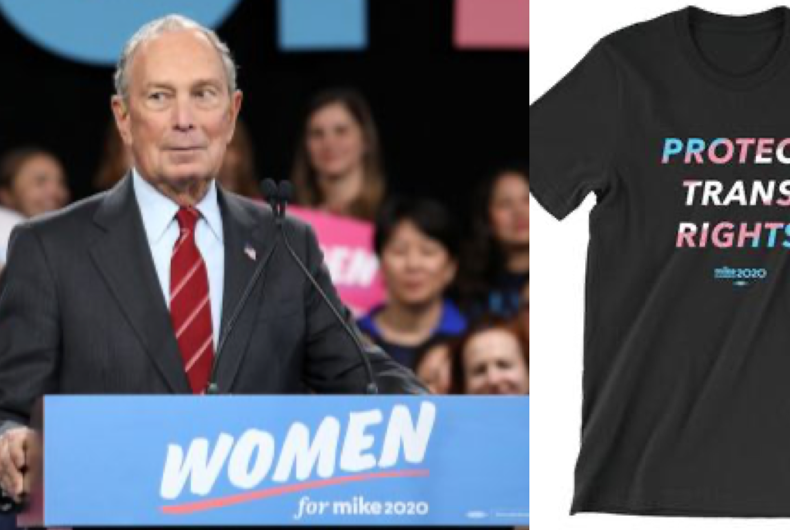 Democratic presidential candidate Michael Bloomberg appears on stage during his "Women for Mike" event (left). His campaign is selling a shirt that says "Protect Trans Rights" for at least $22.25 (right).Photo: Composite via File

If you’re looking for a generic shirt that says “Protect Trans Rights” or a similar trans-friendly message, you can find many options in size, color and design between Amazon and Etsy alone. Most will come in for under $20 total.

Or, you can pay billionaire Michael Bloomberg between $22.25 and $25.25 – before any shipping or additional charges – for his one mostly-black style tee, complete with the former Republican’s campaign logo for his 2020 run for President.

While the shirt promotes a nice message, it also promotes Bloomberg’s candidacy and does not come with any expression of regret or remorse over several comments over the years that Bloomberg has made about transgender people.

Bloomberg’s website makes it clear that this product, along with all others, are “priced at cost to the campaign and we make no profit from their sale.” It also denotes that its “Paid for by Mike Bloomberg 2020” because, like everything else, the Presidential candidate has completely self-financed the online store for his campaign, that and, in less than four months, has already spent more on advertising than any candidate in presidential history.

So, Bloomberg is either earning his own money back or driving additional funds to his campaign with products such as this.

In speaking down to pro-trans Democrats late last year, Bloomberg said to a crowd that “If your conversation during a presidential election is about some guy wearing a dress and whether ‘he’, ‘she’, or ‘it’ can go to the locker room with their daughter, that’s not a winning formula with most people.” In a video that resurfaced this month, you can also hear Bloomberg call anyone who can “sell the concept” that a trans person should share a locker room with cis people, a “good salesman.”

While trans advocacy groups have asked for the candidate to apologize for his previous remarks, he has instead defended himself as trying to describe how other people think about trans people, not him. Yet, his staff has found time to instead market a product to those pro-trans Democrats without addressing concerns or answering calls to apologize to those he insulted.

“Words matter and Mayor Bloomberg should apologize for using language that demoralizes and dehumanizes members of our community,” Human Rights Campaign President Alphonso David said in a statement.

While the Bloomberg campaign has yet to comment on any of this, the store (hosted on a subdomain of MikeBloomberg.com) cops out from any responsibility in its FAQs, with the fulfillment company Bumperactive claiming that “we run the campaign’s webstore, make the stuff, and ship out the orders — but we’re not actually part of the campaign. If you have something to say to them, we recommend you contact Mike Bloomberg 2020 directly.”

As for Mike’s actual policy, he plans to reverse the ban on transgender individuals from serving in the military, and while his policy page for LGBTQ equality acknowledges that “there is a crisis of violence against transgender people, especially trans women of color,” the page does not say anything about the people that have promoted anti-trans rhetoric leading to such violence — including that of the candidate the website represents. The campaign has instead touted that he “extended anti-discrimination laws to include gender identity in 2002,” similar to most of their responses related to anti-trans remark this month.