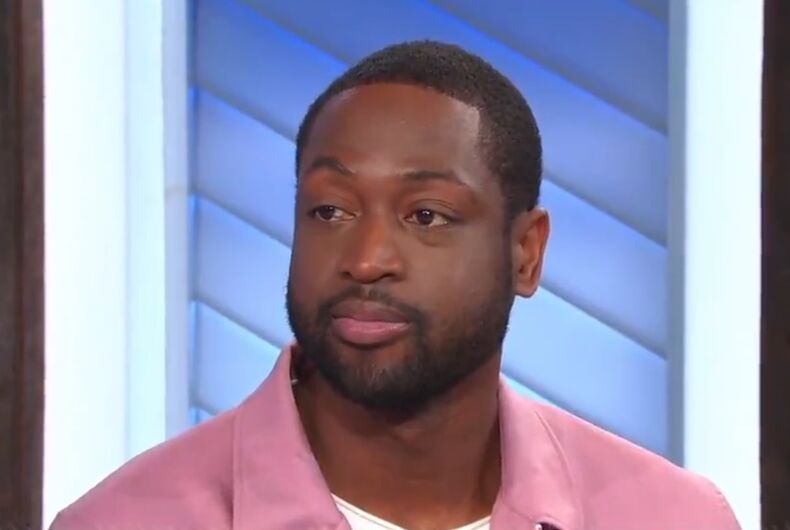 Former NBA player Dwyane Wade said that his daughter Zaya knew that she was a girl as young as age three.

Speaking with Good Morning America‘s Robin Roberts about his soon-to-be-released documentary D. Wade: Life Unexpected, Wade explained how Zaya came to understand her identity and then explained it to him and his wife, actress Gabrielle Union.

Related: Dwyane Wade’s daughter is transgender & he’s the best dad she could have

She came back to her parents and said that she didn’t think that she was gay because she is a girl who’s attracted to boys. “She went down the list and said, ‘This is how I identify myself. This is my gender identity.’”

Later in the interview, Wade discussed criticism he has gotten for accepting his 12-year-old transgender daughter and said that Zaya has known her identity since she was three.

“Zaya has known it for nine years, since she was three-years-old,” Wade said.

“She’s known since she was three?” Roberts asked. Wade confirmed that’s what he said.

Roberts then asked if he knew.

“I learned early on that I had to check myself,” he said. “I’ve been a person in the locker room that has been a part of the conversation that have said the wrong phrases and the wrong words myself.”

He added that he never had a teammate come out to him as gay or trans and his daughter is the first LGBTQ person he has been close with.

“It was a process for us to sit down with our daughter and find out who she is and what she likes and not put something on her,” he said.

FULL INTERVIEW: NBA superstar @DwyaneWade opens up to @robinroberts about daughter Zaya’s gender identity and why it was important to feature this journey his new @ESPN documentary. https://t.co/ZdCAUU3gAQ pic.twitter.com/Bf6xUJQvcx

Man set fire to a trans woman’s apartment: “Anyone who is a tr***y offends me”