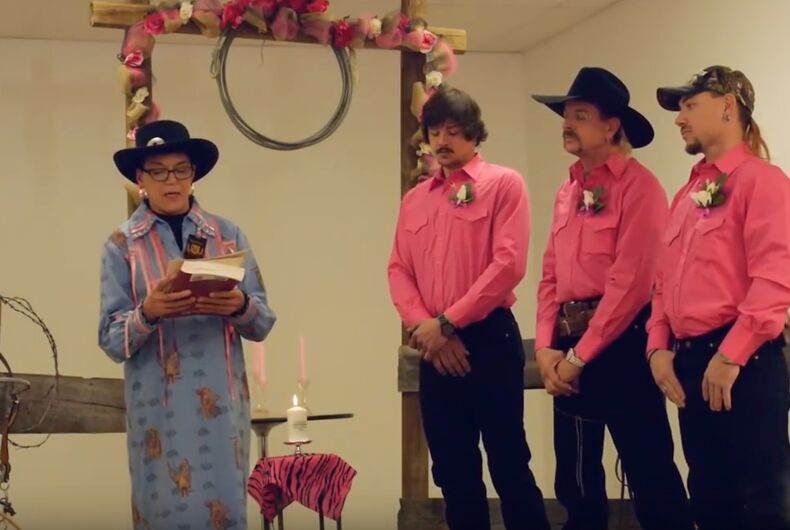 Joe Exotic mania has swept the nation and fans of the Netflix hit Tiger King have been scouring the web to find more background on the former roadside petting zoo owner and his menagerie of animals and staff.

Exotic’s unusual three-way wedding with two younger men who also worked at the facility, John Finlay and Travis Maldonado, is featured in the series. Now fans have tracked down video of the ceremony online.

Finlay eventually left the marriage to be with a woman. Maldonado accidentally shot himself in the head and died from the injuries. Both men are described as “straight” in the show; the possibility of bisexuality wasn’t mentioned.

“In our society today, no wedding is really normal. Our diverse nation has blended together so many ideas of what it means to be married and how one goes about doing it that there is truly no one way to structure a marriage ceremony,” the officiant says at the beginning of the ceremony.

“But even by modern standards where blended families are the new norm, where ceremonies evoke ancient customs alongside modern creations, where in a seemingly ever-increasing number of states and countries anyone can marry the person they love, this is an unusual wedding.”

‘Today we have gathered to witness the union of Travis, John, and Joe,” she continued. “We are here today to offer our love and our blessings as they embark on the next phase of their lives together.”

He was arrested and convicted for hiring a hit man to assassinate a rival animal sanctuary owner. He has since sued for $94 million alleging anti-gay discrimination.

Exotic has been quarantined in prison after being exposed to the novel coronavirus.