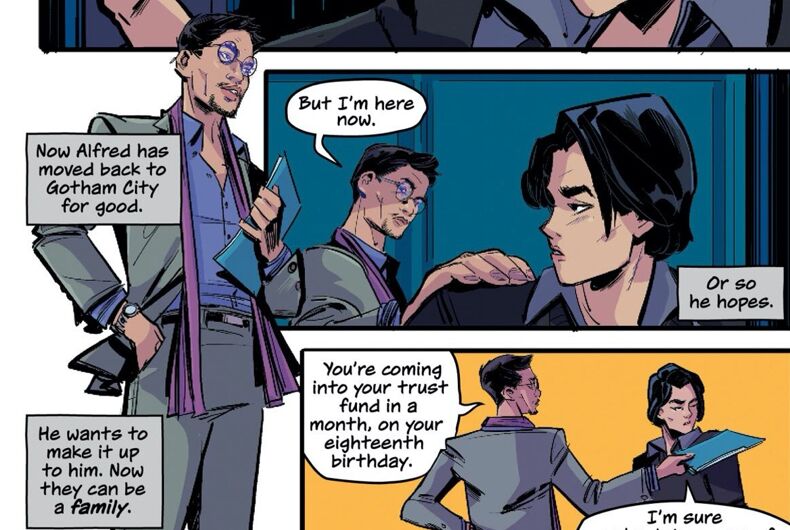 The latest reimagining of the Batman franchise is “more on par with Gossip Girl and Crazy Rich Asians than anything that’s come before.”

One of the main changes involves Bruce Wayne’s loyal butler and guardian, Alfred.

The new graphic novel Gotham High reboots the franchise to portray Wayne as a 17-year-old Chinese-American high school student who’s been kicked out of boarding school and moved into the family home with his gay uncle, Alfred.

The young adult novel takes a dive into the lives of three main characters: Wayne, Selina Kyle (Catwoman), and Jack Napier (Joker). The teenagers have a love triangle.

The book is written with a completely different style than previous caped crusader stories, updating the series with a more modern and younger feel. But the major changes to both the comic’s characters are what’s being talked about.

Selina is the Queen Bee at the local high school. Jack is the class clown with a dark side.

“Bruce Wayne is the billionaire. He’s the richest man alive. So I thought, wouldn’t it be fun if his family was Chinese and from Hong Kong?” author Melissa de la Cruz told Entertainment Weekly. “That made it feel real. There’s been a big influx of wealthy Chinese people who moved from Hong Kong to Arcadia in Los Angeles, and that’s where my mom lives, I’m part-Chinese, my brother lives in Hong Kong, so I thought it would be great to put what I know into Bruce Wayne.”

“I just wanted him to be a little bit more representative of my background and giving him an authentic family – Alfred is not just his butler but also his uncle, his gay uncle from Hong Kong. It gives it this fabulous Crazy Rich Asians sheen to it.”

“That breathes new life into the character, especially in today’s world since we’re living in the most diverse world we’ve probably ever lived in, so it’s more representative of Batman in 2020,” illustrator Thomas Pitilli added. “And since he’s a teenager, I tried my best to put a little bit of myself into the character as well, channeling those feelings of being an adolescent and feeling like an outsider.”

“I definitely wasn’t a billionaire, but oftentimes I felt very separated from everyone else around me.”

The novel is part of the series’ canon.