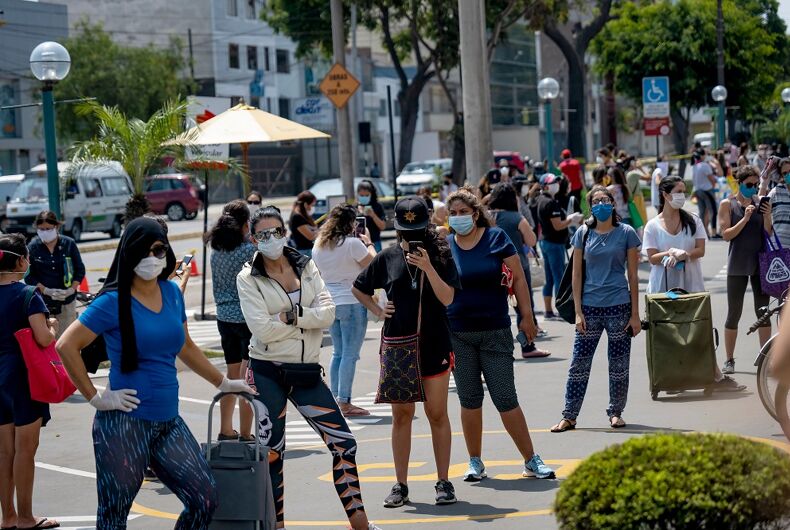 A crowded street on a women's day in Peru, which implemented the same gendered policy.Photo: Shutterstock

And at least one transgender woman has already been arrested for leaving her home on the day women are allowed to go out.

Panama had already restricted travel, banned people from going out for non-essential reasons, closed the border, and instituted a curfew. But too many people were still in the streets, possibly in violation of the rules.

“The great quantity of people circulating outside their homes, despite the obligatory national quarantine, has led the national government to take more severe measures,” President Laurentino Cortizo tweeted.

One of the more severe measures is the gendered policy. LGBTQ organizations were quick to point out that restrictions based on gender would take away rights from transgender people.

“If you’re a trans woman who goes out on a day for men, you’re in danger of being arrested because you don’t look like the gender on your ID,” said Pau González of Trans Men Panama (HTP).

Ali, a 25-year-old transgender man, told the AFP that he’s afraid of police since he presents as male but his ID says that he’s a woman.

“My biggest fear, obviously, is the police, who aren’t trained or sensitized to this subject and I don’t know what attitude they will take with me,” he said.

“I’m 100 percent sure I’ll be stopped in the street and seeing as I don’t fit the mold,” Ali said. “I don’t know if they’ll be aggressive. That’s what scares me.”

Ali is not the only transgender person in Panama whose ID doesn’t match their gender identity and expression. Panama only allows someone to update their legal gender if they have undergone gender confirmation surgery, something that not all transgender people want to get, are able to afford or undergo or have already completed.

Now Human Rights Watch is saying that at least one transgender person has been fined under the policy. Bárbara Delgado, a transgender woman, left her house last Wednesday – one of the days women are allowed to go out – to go to a medical center where she volunteers. She did not have any documentation that she was working there that day.

She and several others were stopped by police, but she was taken down to a police station and detained for several hours because her ID says that she is “male” even though she is a woman who was out on a day that women are allowed to go out.

“There are still police patrols who use the argument that God only created Adam and Eve,” said Ricardo Beteta, president of the Association of New Men and Women of Panama.

Peru has implemented a similar policy of allowing men and women to go out on separate days.