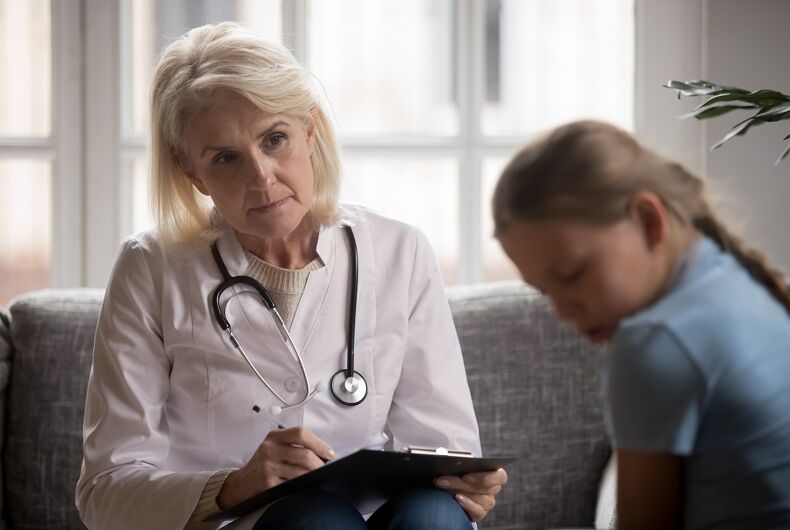 Girls accused of being trans would be required to undergo invasive medical tests.Photo: Shutterstock

While the country is being shut down and the world worries about the spread of coronavirus, the Idaho Senate passed a bill that would ban transgender girls and women from competing in high school and college sports on a 24-11 vote.

And instead of providing free coronavirus testing for people who are at risk of the virus, the bill would require invasive medical tests to determine if a student athlete is cis or trans, according to senate Democrats.

Related: Idaho got closer to passing one of the most anti-transgender laws in the country

State Sen. Mary Souza (R) is a supporter of the bill, which she said is important because “now we are in a new crisis.”

The “crisis,” for her, is transgender girls getting exercise. Not global coronavirus pandemic.

Federal law “started to level the playing field” for girls in sports, Souza said, “but now we are in a new crisis. Girls who have been struggling and training and competing in their sport are suddenly confronted by biological males.”

The bill has already passed the Idaho House, but it was amended in the state senate so it will have to go back to the state house, where it’s expected to pass. It will then be sent to Gov. Brad Little (R) for a signature.

One of Democrats’ main objections to the bill was that it would subject students to invasive medical exams if they are accused of being transgender by an opposing team. The bill calls for tests of an athlete’s “internal and external reproductive anatomy,” their testosterone levels, and DNA.

Senate Republicans amended the bill and said that the concern about invasive testing was addressed. But Democrats weren’t satisfied.

“It would damage and hurt her reputation and dignity for life,” said Sen. Michelle Stennett (D) about girls being subjected to medical tests to determine if they’re trans or cis. “Beyond the medical inaccuracies, this bill risks harming the physical and emotional health of our children.”

Democrats argued that the bill would allow anyone with a grudge against a female athlete to accuse them of being trans and make them get tested, something they said would discourage girls and women from competing in sports.

Sen. Maryanne Jordan (D) pointed out that there hasn’t even been a known transgender student-athlete in Idaho. The state has had seven confirmed cases of coronavirus, though.

The National Center for Transgender Equality (NCTE) said that the bill is unnecessarily divisive in a time when the U.S. is facing a serious problem.

“At a time when our country needs everyone to come together and support one another, we should not be targeting transgender youth with unnecessary and illegal legislation,” said Rodrigo Heng-Lehtinen of the NCTE.

BREAKING: Satan resigns because he can’t keep up with Donald Trump