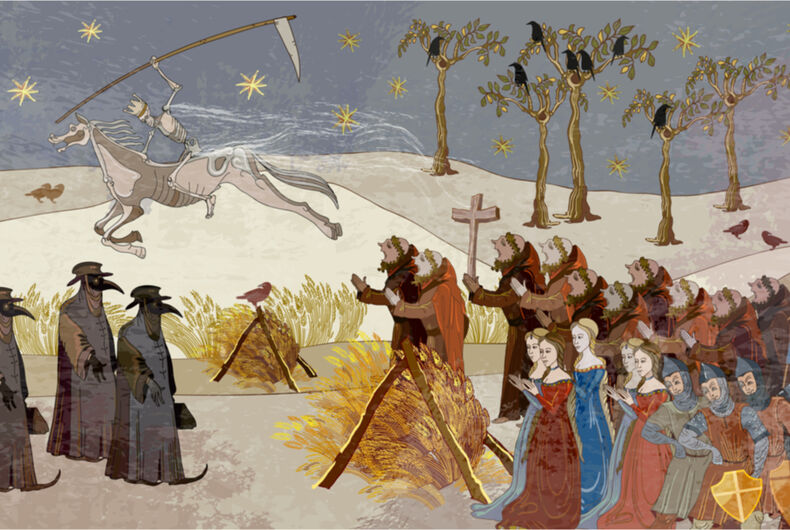 As we navigate scary and uncertain times, it’s important to look to history as a guide. During my quarantine, I re-read A Distant Mirror: The Calamitous 14th Century. It’s a book by Barbara Tuchman and Chapter 5 discusses how people reacted during the ominous Black Plague. It offers lessons we can apply to today’s COVID-19 pandemic.

Ironically, the book actually cheered me up.

If you think things are bleak today, remember that the Black Plague wiped out nearly one in three people in Europe and the Middle East between 1347 and 1351. This translates into more than 20 million corpses.

At the time it was widely thought God had given up on humanity to punish them for sin. Much of the population thought it might be “the end of the world.” So, as bad as things are and as frustrating as they may be, it’s important to count our blessings and realize that it could be significantly worse.

In October 1347, trading ships arrived from the Black Sea and pulled into the harbor of Messina, Sicily. The sailors on those doomed ships were sick and quickly dying with a horrific new disease. With its trademark black boils and rapid death – the illness quickly spread like wildfire across Europe.

Of course, we are a much more advanced civilization today, but some things haven’t changed. Chiefly human nature – which means there are direct parallels between then and now that we can learn from.

When people are frightened, they seek answers. Unfortunately, a significant subset also seeks out scapegoats. In Medieval Europe, Jews were falsely blamed for creating the Black Plague by poisoning the wells.

In Savoy in 1348, Jews were rounded up, put on trial and tortured until they “confessed” to poisoning the wells with packets of poison pills that they allegedly kept in a “narrow stitched leather bag.” These coerced “confessions” were distributed by a letter from town to town and formed the basis for mass retribution. A brutal and deadly wave of false allegations and savage attacks ensued.

The first assaults occurred in the Spring of 1348 in the French towns of Narbonne and Carcassonne. Jews were dragged out of their homes and thrown into bonfires.

In Freiburg, Augsburg, Nurnberg, Munich, Koenigsberg, Regensburg and other city centers, Jews were slaughtered by mobs with a thoroughness that seemed to seek a “final solution.”

Today, in 2020, there is no shortage of ignorant people and demagogues looking to point fingers, stir up trouble, assign blame and inflame tensions. They are opportunistically attempting to exploit the COVID-19 crisis to provoke hated against groups they dislike.

Shamefully, this effort has been led, in part, by President Donald Trump.

Trump is doing this, in spite of the fact we now know that Asian Americans have been targeted, attacked and victimized. While they aren’t being burned alive, like Jews during the Black Plague, they have been harassed, spit on and assaulted. Asian Americans now have targets on their backs.

There are those trying to blame LGBT people for the spread of the coronavirus. Obviously, this is irrational, but our opponents are looking to foment hate and provoke a violent backlash.

Homophobes are deliberately spreading a conspiracy theory that gay people caused coronavirus by partying too much in Italy, by using an old video from a carnival in Brazil. Unfortunately, the fake video has gone viral. No pun intended.

This obnoxious behavior should surprise no one. After the terrorist attacks of 9-11, LGBT people were conveniently targeted by well-known televangelists, including Revs. Jerry Falwell and Robertson.

Had this finger-pointing occurred only a couple decades earlier, it’s likely the consequences would have been far greater. And in other countries, where LGBT rights are less secure, the effects of such reckless rhetoric could still prove deadly today.

In fact, a Ukrainian LGBT organization pushed back against such bigotry by suing Orthodox Patriarch Filaret over comments blaming the spread of the coronavirus on same-sex marriage. The gay rights activists said that his backward comments risked fueling hatred and discrimination.

And, most predictably, the Jews are still being scapegoated today. Rick Wiles, a Florida pastor and the founder of the far-right website TruNews, said on March 26 that God is giving the Jews the coronavirus because they oppose “his son Jesus.”

There is also a wild, online conspiracy theory that 5G wireless technology is responsible for spreading COVID-19. As a result, people are burning down cell towers. Whether it’s the 14th Century or the 21st Century, irrational human behavior is quite predictable.

Some religious fanatics will brazenly disobey social distancing rules, with little regard for the people they harm. They are selfish and don’t care about anybody but themselves. They wantonly infect people, and if those individuals get sick or die– they chalk it up to “God’s will.”

In 1349, a group of roaming Christian religious zealots called the flagellants “erupted in a sudden frenzy,” Tuchman wrote. Members of this cult would literally whip their own bodies in penance until they bled. They roamed in large bands “that sped across Europe with the same fiery contagion as the plague,” merrily slaughtering Jews at every stop along the way.

According to Tuchman’s book:

Organized groups of 200 to 1,000 flagellants stripped to the waist beat themselves with leather whips tipped with iron spikes until they bled. While they cried aloud to Christ and the Virgin for pity, and called upon God to “spare us,” the watching townspeople sobbed and groaned in sympathy. These bands put on regular performances in towns including church squares. The inhabitants greeted them with reverence and ringing of church bells, lodged them in their houses, and brought children to be healed…they dipped clothes in blood, which they pressed against their eyes and preserved as relics.

As you can well imagine, this caused an explosion of new cases of Black Plague, leading to even more sickness, death, and despair. This was done at a time when they actually did know about social distancing. They didn’t know the science behind the theory or about the bacteria that caused the plague, but they did have an understanding that it was spread from close human contact. So, even in the 14th Century, what the flagellants did was grossly reckless and irresponsible.

Which brings us to the year 2020, where we have the same self-absorbed religious zealots who have apparently learned nothing from history. Mired in ignorance and superstition, they flout the law, flock to megachurches, and foolishly believe that God will protect them. Some of those arrogant and thoughtless people will get sick and they will die. They will also infect other innocent people who don’t share their beliefs.

One pastor who learned the hard way was Bishop Gerald Glenn of New Deliverance Evangelistic Church in Richmond, VA. During his infamous in-person service, the Bishop said he firmly believed God was larger than the virus and said he was proud of being “controversial” for violating safety protocols. The Bishop also claimed he was an “essential” worker, saying he’s a preacher and he talks to God.

Proving God has a sense of humor, the good pastor died from the coronavirus on Easter Sunday.

A third similarity with the 14th Century are efforts by unethical charlatans to promote quack cures. Some of these magic elixirs to treat the Black Plague included: drawing out the infection by making the infected person bleed, purging it with laxatives or enemas, lancing the black boils, application of hot plasters, pills of powdered stag’s horn, compounds of rare spices, and emeralds.

There was also a bizarre belief that latrine attendants were immune to the Black Plague, so many people visited the public latrines on the theory that the odors were efficacious.

Of course, this was at a time when people thought washing the scalp with a boy’s urine cured ringworm, and gout was treated with goat dung, mixed with rosemary and honey. Talk about the cure being worse than the curse!

The final similarity between then and now is the role social and financial inequality plays in spreading diseases.

The rich fled to their country places with wells of cool water and vaults of rare wines. The urban poor died in their burrows, and only the stench of their bodies informed neighbors of their death. That the poor were more heavily afflicted than the rich was clearly remarked at the time in the north and the south. A Scottish chronicler, John of Fordun, stated flatly that the pest “attacked especially the meaner sort and common people—seldom the magnates.

Sound familiar? Unfortunately, then and now, different incomes often lead to different health outcomes. I guess they didn’t have universal healthcare back then either.