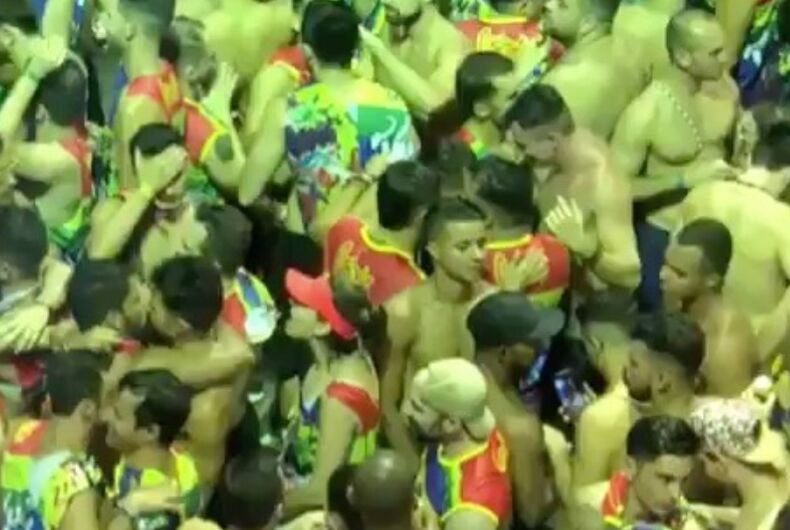 Video of a fake "gay conference" have rocketed around the webPhoto: Screenshot

Religious extremists and their gullible followers have been circulating a fake video that they say shows “the last gay conference in Italy before the virus attack.”

The video is actually from a Brazilian carnival in 2018, years before the coronavirus COVID-19 pandemic started.

The video shows a crowd of men tightly packed together. Most are shirtless and some are kissing.

“God has every right to be angry with humanity, this was the last gay conference in Italy before the virus attack,” one Facebook post read.

Other social media users shared the same video with similar anti-gay sentiments as well. Twitter user Saadia Iqbal Khan, for example, posted the video and included the same language, “God has every right to be angry with humanity.”

She also repeatedly shared content condemning India for blaming Muslims for “starting” the pandemic, because no one wants to be unfairly blamed for the global pandemic, right?

Other social media users quickly made the fake video rocket around the web, most using the same phrase claiming the viral infection was God’s wrath.

But fact-checkers realized the video wasn’t from a “gay conference” at all. The AFP Fact Check used the verification tool InVID-WeVerify to determine the original video that was uploaded in 2018 after the annual Bahian Carnival.

They note that the music playing in the background is a popular Brazilian carnival song called “Minha pequena Eva.” The rainbow-colored shirts some men are wearing advertise a local block party on the back.

Shirts are frequently used at Brazillian events to prove someone has paid an admission fee. The designs change for each new event. A local reporter tweeted a photo of the party in 2018, saying the crowd “is already looking forward to the start of the parade.”

What can the Black Plague teach us about America’s reaction to the COVID-19 crisis?