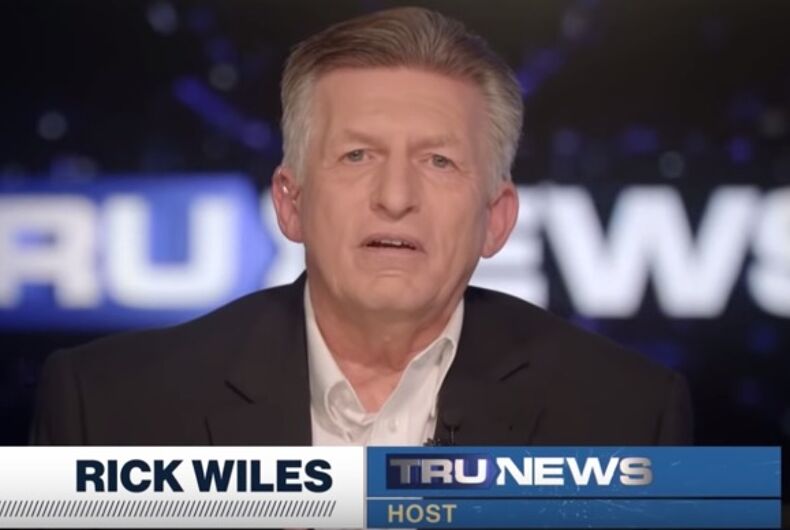 Every once in a while along comes proof that crackpots are ecumenical in their hatred. White supremacists are also homophobes, and birthers are also Islamophobes (like the president). The latest example comes from minister Rick Wiles, but this time there’s a novel twist. Right Wing Watch reports that Wiles hosted and agreed with guests who managed to combine anti-transgender hatred with anti-Semitism.

Their claim: transgenderism is a “Zionist plot” meant to destroy humanity as we know it.

On a recent program on his TruNews radio program, Wiles showcased Steve and Jana Ben-Nun, Messianic Jews who apparently traffic in the same kind of nuttiness that Wiles favors. Messianic Jews believe that Jesus is the Jewish Messiah, and that salvation comes only from accepting him as your savior.

As such, their movement has a lot more in common with the precepts of evangelical Christianity than of Judaism, with the bigotry to match.

That helps explain the Ben-Nuns’ willingness to engage in unvarnished anti-Semitism, using hateful stereotypes against Jews. “They want to get Gentile riches, and they want to rule the Gentiles,” Jana Ben-Nun told Wiles. “They don’t consider Gentiles [to be] fully human beings.”

According to Ben-Nun, the “endgame” is to remake humanity in the image of Adam. In their religion’s version, Adam “wasn’t male or female, he was male and female in one body, and this is why you see this transgender agenda today.”

That lunacy prompted Wiles to ask, “Is Zionism behind the transgender movement?” To which, Ben-Nun gave a resounding “yes” and went on to put Jews at the center of an elaborate conspiracy. “They want to bring [the world] to the original,” Ben-Nun said. “Who was original? Adam. He was androgynous.”

“So now they’re putting specific things in food, in drink, and basically their end game is to make humans on Earth that will survive—whatever it is they are bringing—androgynous.”

“What they are really trying to do is undo God’s creation,” Wiles said. “They are at odds with the Creator.”

Wiles is no stranger to off-the-wall theories – many involving anti-LGBTQ hatred, so this tour into the depths of nuttery was in character. In the past, Wiles has said that Ebola would solve the nation’s “problems” with homosexuality and that Rachel Maddow was going to lead a coup and decapitate President Trump. More recently, Wiles claimed that the coronavirus outbreak was God’s plan to purge sinfulness from the planet, including transgender children.

Wiles also has a long track record of vicious anti-Semitism. Just last fall, he claimed that impeachment was a “Jew coup” and that Jews were preparing to murder millions of Christians.

For his hate speech, Wiles has been banned from YouTube. However, he has found another outlet much more welcoming – despite his vicious bigotry, the Trump administration saw it fit to grant him White House journalism credentials just last month.

Could the Presidential Medal of Freedom be far behind?

Lily Tomlin is leaving her prints on Hollywood Blvd. in legendary honor