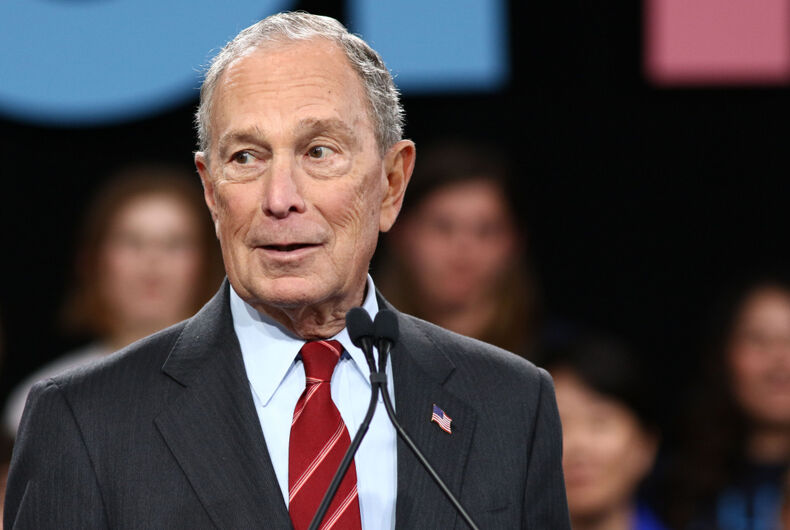 After weeks of silence, Democratic presidential candidate Michael Bloomberg has issued an apology for his past inflammatory remarks about the transgender community.

Related: Bloomberg hasn’t apologized for anti-trans past but is selling a ‘protect trans rights’ tee

Here's @MikeBloomberg in December 2016 at Oxford explaining how trans rights simply won't fly in the midwest because only the "intelligentsia" can understand why "some man wearing a dress should be in a locker room with their daughter." pic.twitter.com/g6aa8aB1jq

On Thursday, after meeting with transgender activists and allies, Bloomberg released the following statement:

“Today, I spoke with leaders from the transgender community and have heard from elected officials like [transgender ally] Mayor London Breed, and I understand that my words had caused hurt.”

“It was a poor attempt to describe how some who oppose transgender equality think about this issue — and those words do not reflect my unwavering support for equality for transgender Americans. I want to offer my sincerest apologies to the members of the transgender community.

Given the ongoing violence that the trans community faces, including the recent killing of Alexa Ruiz in Puerto Rico, we need a president who will set the moral compass to ensure safety, respect and dignity for all trans people. As mayor, I signed a sweeping transgender civil rights bill and, as president, will promote policies that advance equality for transgender Americans who have been attacked by the Trump administration over the past three years.”

The civil rights bill to which Bloomberg refers is likely the transgender anti-discrimination bill passed by the New York City Council in 2002. Bloomberg did sign the bill, but according to a 2002 article from the New York Times, he initially argued that a new law was not needed because the New York Human Rights Law already protected people against discrimination based on gender identity.

New York’s Human Rights Law does indded ban discrimination based on gender identity, but the Council felt a law was needed that more explicitly focused on transgender people, as they were still experiencing discrimination.

In response to Bloomberg’s recent apology, the president of the Human Rights Campaign, Alphonso David, who had been pushing for Bloomberg to apologize, released a statement on behalf of HRC:

“The Human Rights Campaign called on Mayor Bloomberg to apologize, and we are glad that he did. He took the time to engage members of the transgender community and it is heartening that he has realized his comments were unacceptable.  It is our collective responsibility to ensure that all members of our community, particularly the most marginalized members, are treated with dignity and respect. Today, Mayor Bloomberg and his campaign rededicated themselves to pursuing a more inclusive future for the LGBTQ community, and for transgender people specifically.

“Our focus, alongside all the pro-equality candidates, remains on mobilizing the 57 million Equality Voters around the country to defeat Donald Trump and Mike Pence and reverse their administration’s many attacks on our community.”

Bloomberg’s plans for LGBTQ equality include passing the Equality Act, repealing Trump’s transgender military ban, eradicating HIV by 2030, requiring LGBTQ-issues training for all law enforcement, and launching a federal “Respect for All” initiative to combat bullying, harassment, and discrimination nationwide.