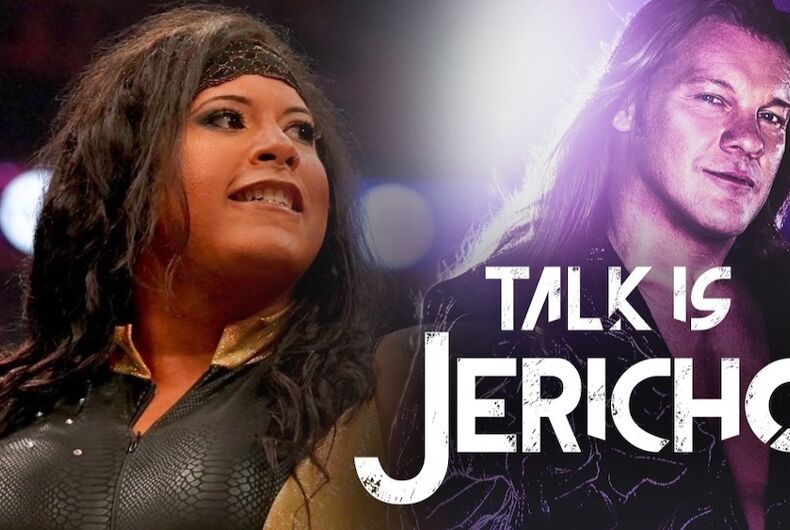 Transgender wrestling trailblazer Nyla Rose has turned wrestling legend Chris Jericho into a staunch trans ally after she appeared on his podcast, Talk is Jericho, and spoke openly about her experiences as a trans woman.

Jericho, a seven-time WWE champion and six-time World Title champion, delighted trans people and allies after posting about how his conversation with Rose inspired him. When transphobic commenters began mocking Jericho’s use of Rose’s female pronouns, he told them off, earning him praise from Twitter commenters.

Related: Why are WWE wrestlers bashing gays instead of each other?

After talking with her, Jericho wrote in an Instagram post that Rose’s appearance on his show was “one of my favorite episodes ever, as I learned about things I had no idea about.” He added, “Thanks for the education, Nyla!”

Rose is signed by All Elite Wrestling, along with Jericho. She’s not only the first transgender woman to be signed to a major wrestling league, but she also won the AEW Women’s World title this year.

Jericho then defended Rose from multiple trolls who tried to mock her on Instagram.

One person commented, “Why do you keep saying ‘her‘?” Jericho tagged the commenter and wrote, “Her. HER!”

Another wrote, “True female from a biological standpoint? That is trolling. Do better, Chris.” Jericho responded, “Go study the transgender process and get back to me, junior.”

Of course, there were many positive responses as well, and many took to Twitter to voice their excitement.

Nyla Rose turned Chris Jericho into an outspoken trans ally in less than an hour wow her power pic.twitter.com/5vnTGXBIOW

This was amazing and important. Hearing Nyla get a platform to highlight her story and talk with a demo she normally wouldn’t reach is NEEDED.

Chris Jericho defending Nyla Rose is giving me life. I love Chris and Nyla. All the transphobic folks are embarrassing. I am thrilled for her. #aew #nylarose She is a damn Goddess pic.twitter.com/sWTN64Cc2x

In the past, Jericho’s views have been unclear. He received criticism for a previous Talk is Jericho episode in which he interviewed Donald Trump Jr. He spoke about the criticism in Wrestling Inc., where he remained wishy-washy about his own beliefs and left fans unsure what side of history he was on.

At least when it comes to trans rights, Jericho seems to have made up his mind.

Michael Bloomberg apologizes for anti-trans comments after weeks of silence

Texas teacher suspended for being gay will donate $10,000 of legal settlement to an LGBTQ charity