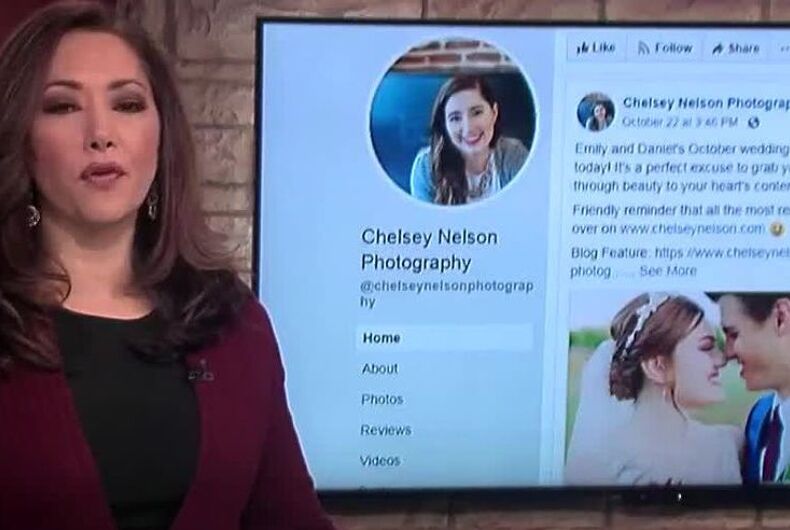 The Department of Justice (DOJ) has filed a  “statement of interest” in federal court this week stating that a Louisville, Kentucky city ordinance requiring wedding photographer Chelsey Nelson to shoot a same-sex marriage “violates her sincerely held religious beliefs… [and] invades her First Amendment rights.”

Nelson sued the city of Louisville last November and is being represented by Alliance Defending Freedom (ADF), the SPLC-designated hate group that has served as a legal counsel in numerous anti-LGBTQ cases. ADF is also a lobbying advocate for laws that erode queer civil rights.

In its statement of interest, the DOJ wrote, “The Free Speech Clause prohibits the government from requiring people to engage in speech supporting or promoting someone else’s expressive event, such as a wedding ceremony. Forcing a photographer, against her conscience, to express her support for a wedding that her faith opposes violates the Constitution.”

In a follow-up statement, Eric Dreiband, assistant attorney general for the Department of Justice’s Civil Rights Division, wrote, “The First Amendment forbids the government from forcing someone to speak in a manner that violates individual conscience. The U.S. Department of Justice will continue to protect the right of all persons to exercise their constitutional right to speech and expression.”

Nelson herself says her belief that “God created marriage to be an exclusive covenant between one man and one woman [affects] every aspect of her life… her business, her art, and her creativity.” She adds that she’d “decline any request” to work for “a same-sex wedding, polygamous wedding, or an open marriage wedding because creating artwork promoting these events would violate Chelsey’s religious and artistic beliefs.”

Nelson herself hasn’t been asked to photograph a same-sex wedding — she’s merely suing the city pre-emptively, saying the law itself threatens her religious beliefs. As such, the city is asking the court to throw out her case because the law hasn’t actually affected her at all yet, bringing her legal standing to challenge it into question.

The DOJ’s support of Nelson is unsurprising considering the Trump administration’s longstanding courting of anti-LGBTQ evangelical Christians. In July 2018, the DOJ announced the formation of the Religious Liberty Task Force to allow religious discrimination in national civil rights cases. The Task Force was the brainchild of anti-LGBTQ hate groups.

In June 2018, the DOJ also filed an amicus brief with the Supreme Court siding with the anti-gay baker in the case of Masterpiece Cakeshop, Ltd. v. Colorado Civil Rights Commission. In its brief, the DOJ said wedding services are basically forms of “art” and that the government has no compelling interest to stop societal homophobia.

A third of Poland has declared itself “LGBTQ-free zones”

Michael Bloomberg apologizes for anti-trans comments after weeks of silence