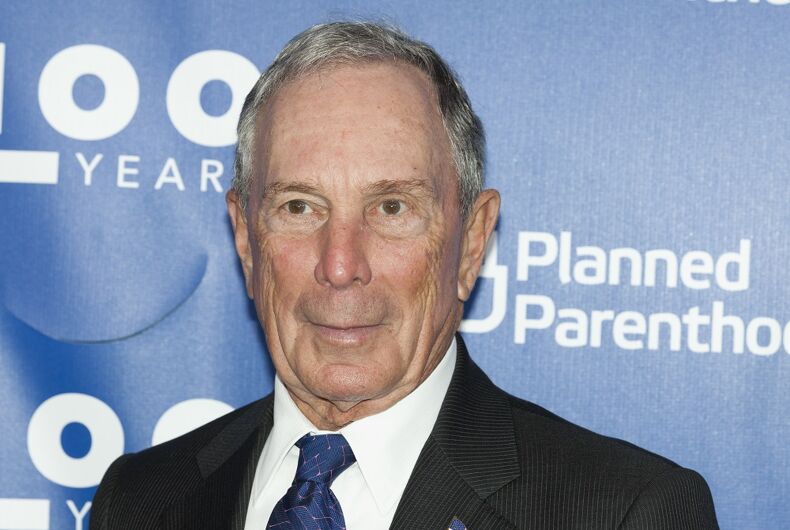 Mike Bloomberg, the former Republican mayor of New York City who’s running in the Democratic presidential primary, referred to transgender women as “he-she or it” at a 2019 business forum.

Related: I was stopped-and-frisked 4 times during the Bloomberg administration

“If you go to the middle of the country, people would say… if your conversation during a presidential election is about some guy wearing a dress and whether he-she or it can go to the locker room with their daughter, that’s not a winning formula for most people,” the billionaire Manhattanite said in video uncovered by Buzzfeed News.

Reducing transgender equality to use of locker room facilities with minors – especially transgender women with girls – is a common tactic used by Christian conservatives to distract from the issue and vilify transgender people as child molesters.

Bloomberg went on to say that people don’t care about “social issues” but instead care about health care and education. He blamed the Democratic Party for Donald Trump’s election, saying that the party has moved so far to the left that he was able to win.

“You can understand when you look at the Democratic Party, they are so far left that two years ago there was nobody on their side who would take these positions, and today virtually all the candidates for president of the Democratic Party are so progressive,” he said.

“I don’t know what progressive means,” he added.

His comments on transgender women start after the 12:45 mark.

“Transgender women aren’t ‘he-she or it,’ they’re women,” said HRC’s president Alphonso David in a statement. “LGBTQ people are human and deserve to be treated with respect.”

“We expect all pro-equality candidates, including Mayor Bloomberg, to create policy solutions to end the epidemic of violence our community faces, not use the same talking points our opponents use to dehumanize transgender people and justify their own hateful beliefs.” David was referring to the at least 26 murders of transgender people – mostly Black transgender women – that occurred in 2019.

Two weeks ago, video was uncovered of Bloomberg making a similar argument at Oxford University in 2016 when asked a question about Brexit.

“If you want to know if somebody is a good salesman, give them the job of going to the Midwest and picking a town and selling to that town the concept that some man wearing a dress should be in a locker room with their daughter,” he said. “If you can sell that, you can sell anything.”