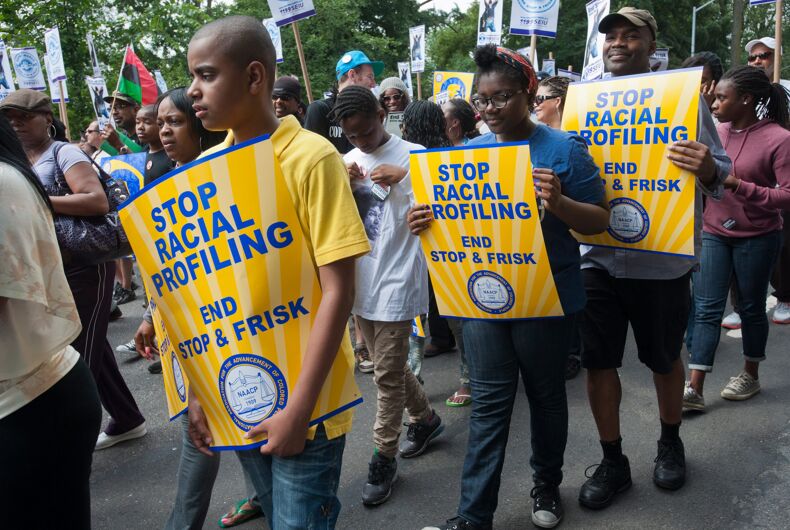 June 17, 2012: Thousands of demonstrators march down Fifth Avenue in New York protesting the NYPD policy of stop and frisk.Photo: Shutterstock

Black men between the ages of 14 and 24 were stopped-and-frisked more times than the actual population of black men that age in New York City. Most Black teens and young adults were racially profiled multiple times according to the reports that the police submitted.

I was one of those teens. When I was a teenager I was stopped and frisked four times by the NYPD between 2011 and 2014. I watched more than one family member get stopped, frisked, and unlawfully arrested under this policy.

Related: Black history is now. I’m part of it & so are you.

A Black, bisexual man, I grew up in East New York, the precinct of New York City where stop and frisk happened the most frequently.

Then Mayor Michael Bloomberg (R) and his police commissioner, Raymond Kelly, were found to be “engaging in an unwritten policy of racial profiling” according to the ruling in Floyd v. City of New York. The practice was subsequently deemed unconstitutional. The NYPD is still under federal monitoring to ensure they actually stop the practice.

IMO here’s one of the most racist stats ever:

Throughout his three-term mayorship between 2002 and 2013, Bloomberg used his money and his disregard for the rules to push his agenda – even when it was ineffective. Not much has changed.

Bloomberg is again using his money and disregard for the rules, this time for a shot at the Presidency of the United States. In spite of this, he is becoming a serious contender for the Presidential nomination.

While many will argue that Bloomberg is a “better option than Donald Trump,” he has committed several of the same offenses that have proven harmful for the campaigns of other Democratic candidates – and supports many things that Trump has done.

Bloomberg enacted policies against the interest of LGBTQ people that had drastic effects on our community. While he touts his personal support of marriage equality as early as 2005, Bloomberg’s administration actively opposed it in court and the legislature.

Bloomberg also chose not to enforce or support the Equal Benefits Law, even trying to get an injunction against it. The law would have afforded the same rights to same-sex partners as other married couples.

The move prompted out members of his administration to resign in protest. He was frequently booed and protested by the Human Rights Campaign and ACT-UP New York.

While Bloomberg’s policies did little to protect the interests of LGBTQ people during his tenure, hate crimes targeting the community were frequent and often unresolved. Instead of addressing that, Bloomberg funded many of the campaigns of Republican politicians that advocated for anti-LGBTQ policies in order to benefit from personal favors and tax cuts.

Do you know who else holds similar distinctions? Donald Trump.

Like Trump, Bloomberg continuously cut funding to HIV prevention as mayor “at a time when new HIV infections were increasing among young Black and Latino gay and bisexual men,” according to GayCityNews.

He allowed the NYPD to target LGBTQ minority people frequenting gay or LGBTQ-friendly businesses in the late 2000s, leading to lawsuits and accusations of entrapment.

Even outside of the office of mayor, Bloomberg promoted anti-trans rhetoric in speeches as late as 2016.

This leads back to stop-and-frisk, a policy of Bloomberg’s predecessor Rudy Giuliani, who is now Trump’s lawyer. Bloomberg continued Giuliani’s “broken windows” policies, where people committing minor infractions were prioritized and criminalized as part of a failed effort to prevent more violent crime.

He didn’t just allow stop-and-frisk to grow, he encouraged it to spread like wildfire. By 2011, the lawful assaults occurred more than seven times than they did when Bloomberg took office in 2002. He paved the way for one of the world’s largest police forces to rely on lazy, racist policy to address crime in the city – and it didn’t even work.

The New York ACLU found that “Black and Latino New Yorkers were more likely to be frisked than whites,” but they were “less likely to be found with a weapon” – less than two percent of the time. Meanwhile, violent crimes and crime reports overall rose across the city between 2009 and 2013 – including in Brooklyn, where I was stopped several times.

The increased policing of minorities caused several police brutality-related deaths. Yet Bloomberg continued to defend stop-and-frisk for years – and it’s one of the several ideological points he shared in common with Trump (who remains in favor of the policy despite its unconstitutionality).

Bloomberg is also in the same age range as Joe Biden, Bernie Sanders, and Elizabeth Warren. While many accuse Sanders of not being a real Democrat, Bloomberg was a Republican at first as mayor and then became an “independent” in 2007 to circumvent the rules preventing a mayor of New York from serving more than two terms. Now he’s a Democrat to run for President.

While governing the Big Apple is vastly different from South Bend, Indiana, Bloomberg only has three more years of experience than Buttigieg. Pete has, in fact, run in more elections.

The only distinction that sets Bloomberg apart from other Democrats is his self-funded campaign and willingness to trade pointless insults with Trump – which mean nothing to people actually harmed by the current administration or Bloomberg’s.

.@realDonaldTrump – we know many of the same people in NY. Behind your back they laugh at you & call you a carnival barking clown. They know you inherited a fortune & squandered it with stupid deals and incompetence.

I have the record & the resources to defeat you. And I will. https://t.co/fO4azmZaUg

These policies aren’t distant, historical events or minor inconveniences. These were the intentional, inflammatory decisions that defined the Bloomberg administration.

They are painfully similar to Trump’s administration, and it’s a smack in the face to poor, non-white, and LGBTQ people who  endured them for the last two decades – especially during Black History Month, where we remember those who fought policies such as Bloomberg’s.

If we’re willing to elect someone else as president who has openly crafted a record of being anti-Black, made life harder for LGBTQ people, defended rich people’s interests, and disregarded the law and civil liberties, how much different would that be from the current administration?