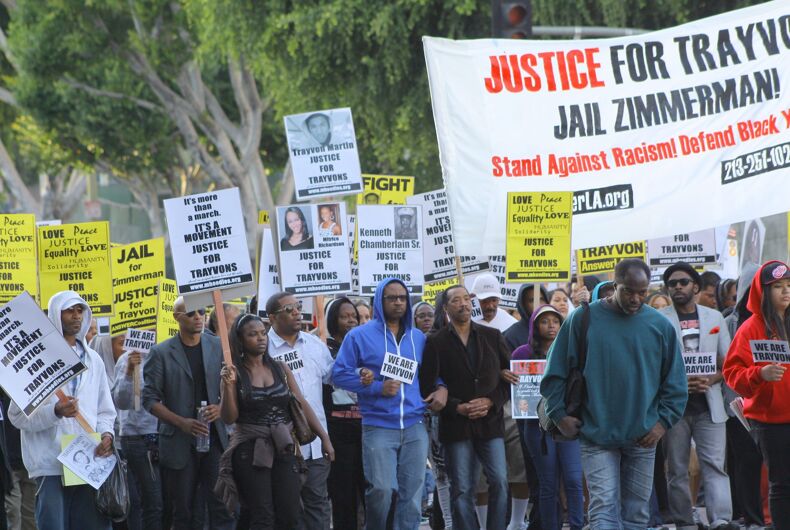 APRIL 9, 2012: Protesters march in support of Trayvon Martin and other victims of violence in Los AngelesPhoto: Shutterstock

Trayvon Martin’s killer, George Zimmerman, is suing Democratic presidential candidates Pete Buttigieg and Elizabeth Warren for “malicious defamation.” He claims the two have painted him as “a white supremacist and racist.”

Zimmerman, who became the face of racial profiling after killing that spawned nationwide protests, was acquitted of charges when he argued that he killed Martin in self-defense in a decision widely criticized as racist. His attorneys used racist tropes to win, painting the unarmed teenager as a threat.

Zimmerman accuses the candidates of using the killing “as a pretext to demagogue and falsely brand Zimmerman as a white supremacist and racist to their millions of Twitter followers.” Both candidates sent tweets on what would have been Martin’s 25th birthday that condemned gun violence and racism; neither mentioned Zimmerman.

“The obvious intent of Buttigieg and Warren’s tweets is alleged race-baiting, in an attempt to draw African-American votes during this Democrat presidential primary season,” his attorney, Larry Klayman, said in an announcement. Klayman is known for launching baseless lawsuits to get publicity.

“Larry Klayman is a pathologically litigious attorney and professional gadfly notorious for suing everyone from Iran’s Supreme Leader to his own mother,” according to the Southern Poverty Law Center, a group that monitors far-right extremists and hate groups.

“Their despicable ‘race tactics’ are not only causing great harm to persons such as my client George Zimmerman, but also are damaging relations between black and white Americans who are all brothers,” Klayman added.

“The nation should applaud Mr. Zimmerman for taking a strong stand and pushing back against hack politicians like Buttigieg and Warren, who know no bounds of decency and frankly could obviously care less about whom they hurt in their quest to dishonesty use and manipulate black voters to win the 2020 Democrat presidential primary.”

Zimmerman has since auctioned off the gun he used to Martin. He has also sued the victim’s family for defamation along with newspaper publishers and attorneys. Klayman is representing him those lawsuits as well.