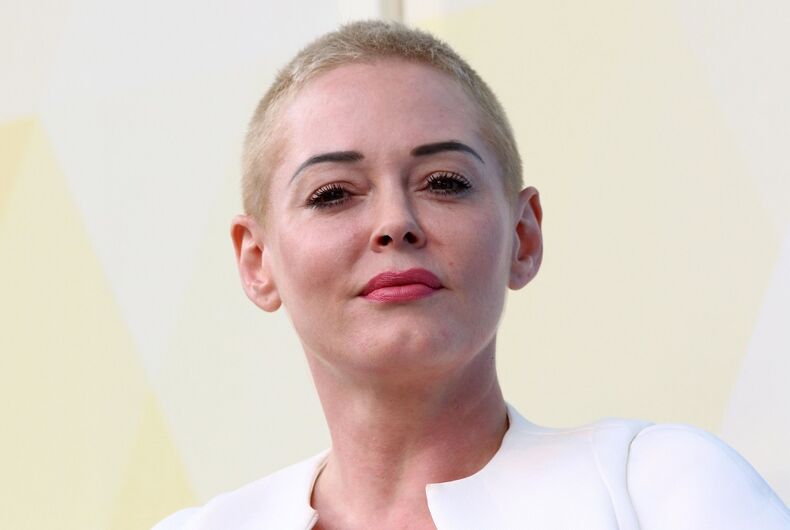 Actress Rose McGowan came out as a registered Republican on Twitter.

McGowan, best known for her work on the TV series Charmed and the film Grindhouse, tweeted that she is “a registered Republican in California.”

Related: If Trump starts a war with Iran, America won’t be in top fighting shape

She said that she hates Bill and Hillary Clinton and Donald Trump, so she would “rather know what evil I’m getting.”

“This is about WWIII, so none of that shit matters anyway,” she concluded, probably referring to the assassination of Iranian Maj. Gen. Qassim Suleimani earlier today.

I’m a registered Republican in California. I loathe the Clintons. I hate Trump. I will not vote Republican, but I cannot vote Democrat. I’d rather know what evil I’m getting, so I’ll go Republican. This is about WWIII, so none of that shit matters anyway. #TeamStayAlive #RoseArmy pic.twitter.com/l7MtDXUVuy

That tweet was sent in response to an earlier tweet where McGowan appeared to be begging the nation of Iran not to invade the U.S.

Dear #Iran, The USA has disrespected your country, your flag, your people. 52% of us humbly apologize. We want peace with your nation. We are being held hostage by a terrorist regime. We do not know how to escape. Please do not kill us. #Soleimani pic.twitter.com/YE54CqGCdr

After taking a lot of heat for that tweet from her followers, McGowan tweeted again to say that she will never vote for a Republican, even though she is a registered Republican.

“I will never vote Republican,” she wrote. “I want the Democrats to win because we are less likely to die. I am a conscientious objector to the USA, it’s policies, lies, corruption, nationalism, racism, and deep misogyny. It is our right and duty as citizens to dissent.”

I will never vote Republican. I want the Democrats to win because we are less likely to die. I am a conscientious objector to the USA, it’s policies, lies, corruption, nationalism, racism, and deep misogyny. It is our right and duty as citizens to dissent.

She faced a backlash from the right in the comments under that tweet, with people telling her to move to Iran if she doesn’t love America enough.

So McGowan tweeted again, saying that she “freaked out” because the assassination of Suleimani may lead to war. She said that America has “Brave soldiers” and that “it’s okay to freak out on those in power.”

Ok, so I freaked out because we may have any impending war. Sometimes it’s okay to freak out on those in power. It’s our right. That is what so many Brave soldiers have fought for. That is democracy. I do not want any more American soldiers killed. That’s it.

Even though McGowan has associated herself with liberal politics and became a prominent voice in the #metoo movement after she accused Harvey Weinstein of sexual assault, she has a history of problematic statements about LGBTQ people and generally confused politics.

In July 2017, McGowan talked about trans women on RuPaul’s podcast What’s the Tee? with Michelle Visage. She said trans women “assume because they felt like a woman on the inside. That’s not developing as a woman. That’s not growing as a woman, that’s not living in this world as a woman, and a lot of the stuff I hear trans complaining about, yeah, welcome to the world.”

She also complained that trans women never ask her what it’s like to be a woman.

A trans activist called her out for those comments at a New York City Barnes & Noble in 2018, and McGowan implied in her response that cisgender women face more oppression than transgender women.

She then accused the trans activist of being a paid plant sent by Harvey Weinstein and quit touring for her book because “I have given beauty, in return I was VERBALLY ASSAULTED for two full minutes.”

In 2014, she said that gay men are more misogynistic than straight men and spent the last century fighting “for the right to stand on top of a float wearing an orange Speedo and take molly.”

In 2019, she pled “no contest” to a misdemeanor drug charge related to being found with cocaine in her wallet at the Dulles International Airport. She got a $2,500 fine and a suspended jail sentence.