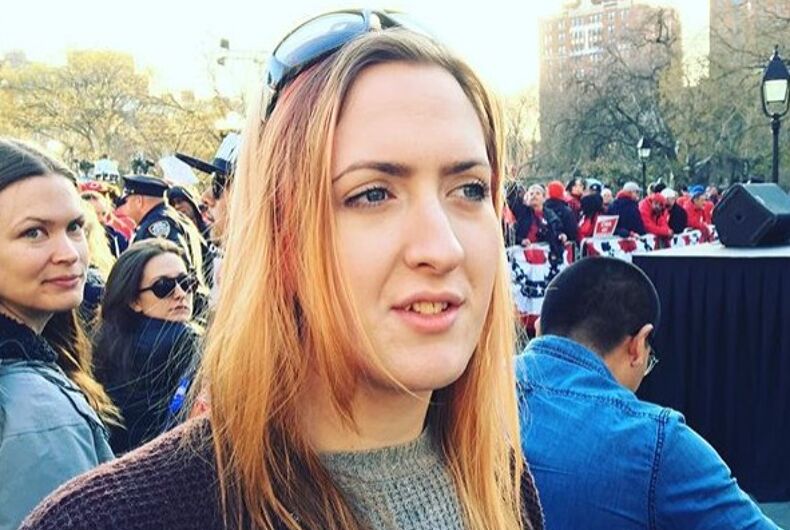 Earlier today, LGBTQ Nation published an article about a confrontation between a transgender activist and actress Rose McGowan at a Barnes & Noble.

The trans activist was bothered by comments McGowan made last year on a podcast where she implied that trans women don’t face oppression like cisgender women do. “They assume… because they felt like a woman on the inside,” she said. “That’s not living in this world as a woman.”

“I have given beauty, in return I was VERBALLY ASSAULTED for two full minutes,” McGowan tweeted, mischaracterizing what started as an attempt at dialog.

The LGBTQ website them. found the trans activist. She’s Andi Dier, the founder of Transgender Advocates for Revolution and a canvasser for the Working Families Party. Three years ago, she confronted Bernie Sanders at a town hall.

She explained why McGowan’s comments on RuPaul’s podcast bothered her: “The fact that not only did she suggest that we don’t live life as a woman, experiencing what women go through. But there was hint that we deal with less shit. The only difference between Rose and I getting harassed on the street is that where her experience can end in sexual assault, mine has a likely chance to end in sexual assault followed by murder. This is especially true for trans women of color. I mean — fuck, I was almost shot in the Bronx for what started as a catcall.”

Dier also responded to McGowan’s accusation that she had never done anything for women. “I literally did so much work to expose a local sexual predator. Someone who raped one of my friends, preyed on someone young and tried pimping her out.”

She said that the security guards misgendered her in front of McGowan, who did nothing to stop them. “When security misgendered me I kind of wanted to die. It’s why I got so much louder. You are hearing my pain. That moment just validated why I was there. Especially because she said nothing to stop or correct them.”

It’s pretty clear that Dier isn’t a “paid plant.” And there’s something unsettling about someone who has done so much to get people to believe the victims of rape and harassment use the old “minorities aren’t really oppressed, they just want money” trope to silence criticism.

McGowan has done a lot of good, which makes this incident more frustrating. If someone like McGowan reacts this negatively to being told that she’s not always perfectly enlightened, then what hope is there for everyone else?