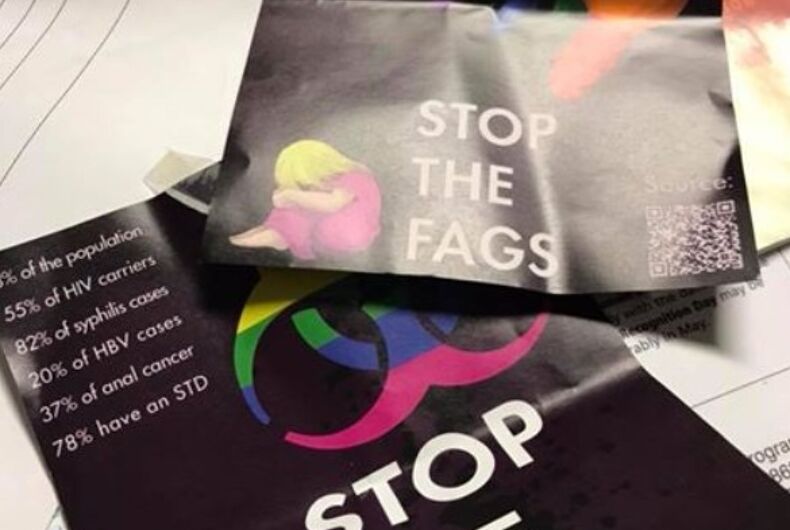 The Grace United Methodist Church in Billings, Montana, has been vandalized twice in the past two weeks.

The church is LGBT-friendly, which the vandals apparently have a problem with.

Last week, someone left “STOP THE FAGS” pamphlets in the church that showed an image of a child hiding their face as a rainbow hand tries to grab or beat them.

The fliers are similar in design to posters that were put up in Australia last year during the national referendum on marriage equality.

The church also hosted a forum to discuss the pamphlets and a swastika that was spray-painted on a local middle school.

This past Thursday, the vandals scaled up their attack on the church. They broke in and painted swastikas on a rainbow flag and the choir door. Outside, a sign that welcomed everyone to the church had “NO GAYS” written on it.

The vandals left more “STOP THE FAGS” fliers in the church.

Several doors to the church were also left open.

Pastor Sarah Beck said that the act was “unacceptable” and that congregants were “going to pray for” the vandals “who are obviously hurting so much that they’re doing so much damage.”

The church said that it has increased security measures and reported the vandalism to the local police and the FBI.

Rose McGowan berated a trans woman. Now the woman is speaking out.