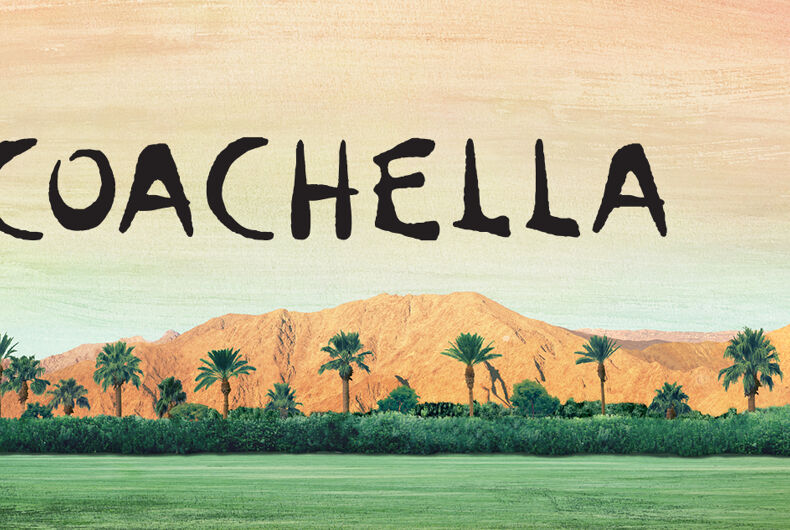 The Coachella Valley Music and Arts Festival, held annually in the eponymous desert in California every spring, released its official line-up for the three days a week, two weekends festival.

The festival is known for its expensive, but highly-sought experience. This year, many of the performers will be out LGBTQ performers – including Frank Ocean, who is believed to be the first gay man headliner in the festival’s history. Other out entertainers that are booked include Lil’ Nas X, Kim Petras, Orville Peck, Pabllo Vittar, and Kevin Abstract as the lead man of BROCKHAMPTON.

Related: 2 transgender siblings say they couldn’t use the restrooms at Coachella

Coachella’s first week of shows are already sold out. This follows their new procedure this year that put initial tickets on sale at the end of last year’s festival, before a line up was set. They also now allow people to sign up for presale access to tickets prior to the general public, and for everyone to take advantage of a payment plan.

Outside of its legendary shows, Coachella has become known of late for being owned by a billionaire labelled as homophobic. Philip Anschutz – who bought a majority stake of the music festival in 2001 and holds it under his corporation, AEG – is a staunch right-winged supporter of many anti-LGBTQ causes and owner of anti-LGBTQ publications.

Reports began being publicized in 2017 linking Anschutz’s ownership of Coachella and his use of his money. LGBTQ Nation reported that “between 2010 and 2013, the Anschutz Foundation gave a combined $190,000 to Alliance Defending Freedom, the National Christian Foundation, and the Family Research Council, all of which actively work against LGBTQ rights such as same-sex marriage and same-sex adoption,” in addition to the millions he gave Republicans in the 2016 elections.

Anschutz dismissed these reports as ‘fake news’, claiming he and his non-profits would never knowingly donate to anti-LGBTQ organizations, but he never denied making the donations. In 2018, reports read that Anschutz supported “anti-LGBTQ+, pro-gun, and anti-abortion” candidates and measures with an additional $325,000 donated to “the Republican party and its various candidates.” In the backlash that followed, he decided to give the Elton John Foundation $1 Million, and offered that as proof he’s not homophobic.

“I support the rights of all people and oppose discrimination and intolerance against the LGBTQ community. I see this as a matter of basic human rights,” Anschutz said at the time of his donation.

Trump is going to destroy the environment, take away your parents’ Medicare & social security, & perhaps get us into a war that some of you will fight & die in.

Do you really want to enrich one of Trump’s biggest donors, Coachella’s owner? https://t.co/VW5FfqN7Wt

In January, co-founder Paul Tollett clarified in an interview with the LA Times that neither he nor Anschutz or a Trump supporter, and he is in full control of the festivities, as he rarely sees or consults with the billionaire on anything. He’s given hundreds of millions to charity and made some mistakes, and he’s addressed it. He made a very strong statement about his beliefs and people’s rights to their sexuality….I’ve seen it here at AEG: He’s good to all of us. There’s no discrimination.”

Now, several LGBTQ musicians will perform at Coachella this April. This group of prominent artists are not the first to make the trip to the desert, however, as Janelle Monae, Lady Gaga, and others have performed at the show.

While several people are showing no interest in forgiving the festival for its owners’ past, others are already dubbing this year’s weekends as ‘Gaychella’ (which is not to be confused with the annual tradition of creating a spoof festival lineup for social media).

– Frank Ocean is a great get
– You got a former headliner (Calvin Harris) & a shoulda-been-a-headliner (Lana) on the second line
– BIGBANG set will be bananas
– Danny Elfman!
– Too low: Carly Rae, Lauren Daigle, 100 gecs, Lil Nas X
– “Someone You Loved” will be sung at Coachella https://t.co/3CFsMznJrs

Financial gap widens between contenders and pretenders in election race