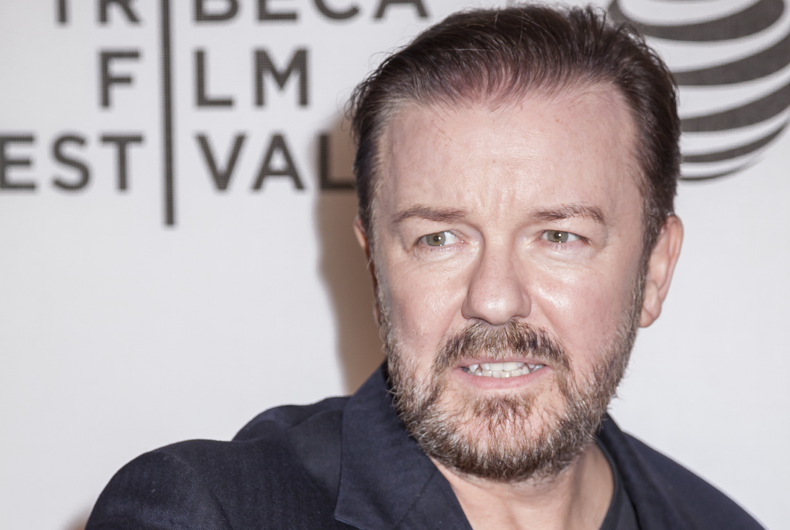 Ricky Gervais, who is hosting the upcoming Golden Globes ceremony this Sunday, explained the reasoning behind his recent series of tweets that appeared to defend J.K. Rowling, causing an uproar.

The first tweets were in response to Jarvis Dupont, a “parody” account and a farcical contributor for Spectator USA who shared their latest humor article calling author J.K. Rowling a trans-exclusionary radical feminist (TERF). Gervais said “those awful biological women can never understand what it must be like for you becoming a lovely lady so late in life. They take their girly privileges for granted.”

Gervais continued, “Winning at female sports and having their own toilets. Well, enough is enough.”

Further tweets, and the backlash they received, caused people to ask for Dick Clark Productions, NBC, and the Hollywood Foreign Press Association, which is the company behind the Golden Globes, to fire him:

In further tweets, Gervais reduced transgender women to “men” taking the rights of women who “have found a new cunning way to dominate and demonise an entire sex.” He then claimed he’s being targeted by people who “can’t afford to have their propositions questioned,” comparing defenses of trans people to “blasphemy laws” and “the fatwah,” a legal Islamic declaration stereotypically associated with terrorism.

“Isn’t free speech amazing?” he continued amidst backlash for his preceding remarks, before challenging any detractors to report his Twitter account. “…If I’ve said anything transphobic you should report me. Twitter has rules in place to guard against that sort of vile bigotry. My account will be closed down and you’ll be proved right…”

After some time, the creator of The Office returned to Twitter and offered an explanation in which he said he was merely “playing along with a spoof account.” According to Entertainment Tonight, Gervais said, “I think trans women are women. I wasn’t talking about trans people.”

In an interview published yesterday, Gervais told The Hollywood Reporter’s Senior Film Editor Piya Sinha-Roy that he was joking:

Jarvis Dupont is a spoof Twitter account, and the joke is that he’s so woke that he’s actually gone full circle and does terrible things. And his latest [bit] is, “I’m trans now.” And he gets all that wrong….now, people saw my tweet and they thought he’s a real trans person, but I’m taking the piss out of Jarvis Dupont, who is actually a woman in real life. And this is the problem. You can say, “Listen, I was joking. It’s a joke.” But that’s not always enough for people. They go, “Well, why were you joking?” Also, add to that the nature of Twitter — it’s so curt, there’s no nuance, it’s there forever out of context.

When asked why he chose to engage with others on Twitter in the first place, Gervais admitted that “That’s a good point…For an easy life, it’s better not to.”

“[Twitter]’s a platform to explain, to put out your side of the argument. You know, if a paper says something that’s untrue, I can go, ‘Not true.’ People like the idea of freedom of speech until they hear something they don’t like.”

The comedian blames the issue on the current social climate. “It’s just another form of what we’ve been through many, many times — it used to be called P.C.”

“I’m happy to play by the rules. It’s just that the 200 million people watching have different rules. That’s the plight.”

As for what his Golden Globes hosting responsibilities will look like, Gervais has been preparing for some time.

As soon as NBC called and said, “Do you want to do it?” I thought, “Well, that’s Christmas ruined because I’ve got to work.” …People think that I’d go out there and I’d get drunk and say off-the-cuff [things]. I don’t. I write jokes…. I write jokes and they’re considered and I make sure they’re bulletproof. Nowadays, you’ve got to make sure they’re bulletproof in 10 years’ time, with people going through saying, “He said this once, 10 years [ago].”

Kevin Hart [lost] his job [as Oscars host] for 10-year-old tweets that he said he was sorry about and deleted at the time. So there’s more pressure on making [the jokes bulletproof]. It’s the world [watching]. This isn’t me in a comedy club.

Gervais will host the Golden Globes live on NBC this Sunday, January 5 at 8 p.m.

Coachella 2020’s several out artists excites some, but disappoints others