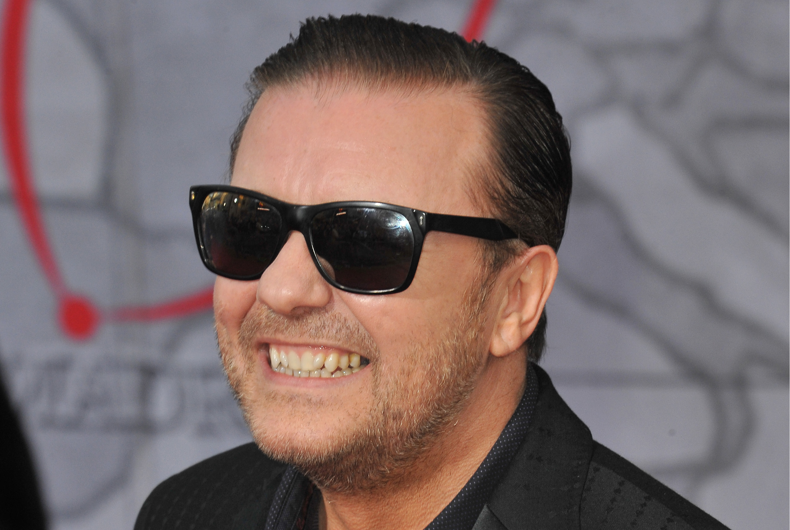 MARCH 11, 2014: Ricky Gervais at the world premiere of his movie Disney's "Muppets Most Wanted" at the El Capitan Theatre, Hollywood.Photo: Shutterstock

Comedian Ricky Gervais is being called transphobic for a series of tweets defending, and reiterating, Harry Potter author J.K. Rowling’s inflammatory comments about transgender women. People are calling for Gervais to be fired from hosting the 77th Golden Globes Awards on January 5, 2020, being held by the Hollywood Foreign Press Association.

After saying ‘enough is enough’ and daring followers to report him, Gervais now says it was all a joke’, as it’s his job to make fun of every identity.

In response to writer Jarvis Dupont posting her latest article in Spectator USA on Twitter in which she designates Rowling as a trans-exclusionary radical feminist (TERF), Gervais mocked Dupont and other trans women for being upset by “awful biological women” “who can never understand…becoming a lovely lady so late in life” and “take their girly privileges for granted.”

Gervais, the creator and star of the original series The Office in the UK and Extras, concluded in his reply to Dupont, “Winning at female sports and having their own toilets. Well, enough is enough.”

Those awful biological women can never understand what it must be like for you becoming a lovely lady so late in life. They take their girly privileges for granted. Winning at female sports and having their own toilets. Well, enough is enough.

In further tweets, Gervais reduced transgender women to ‘men’ taking the rights of women who ‘have found a new cunning way to dominate and demonise an entire sex.’ He then claimed he’s being targeted by people who ‘can’t afford to have their propositions questioned’, comparing defenses of trans people to ‘blasphemy laws’ and ‘the fatwah’, a legal Islamic declaration stereotypically associated with terrorism.

“Isn’t free speech amazing?” he continued amidst backlash for his preceding remarks, before challenging any detractors to report his Twitter account. “…If I’ve said anything transphobic you should report me. Twitter has rules in place to guard against that sort of vile bigotry. My account will be closed down and you’ll be proved right…”

Stop saying what I genuinely believe in case some people don't like it? Nah. Thanks for the suggestion though. Isn't free speech amazing?

Trans women’s existences became a topic of popularity on Twitter after Rowling sent a tweet in defense of Maya Forstator, an anti-trans activist who was not asked back to their job at the Centre for Global Development in the UK. Rowling blamed trans women for this and tweeted that it was wrong to “force women out of their jobs for stating that sex is real.” Now, Gervais is the latest British public figure to make remarks on trans women that questions the validity of their rights or existences.

The day after these tweets, Gervais plays off the hours of tweets about trans women as him just ‘playing along’ with trolls on the internet. Later, when confronted with a November op-ed from entertainment outlet IndieWire detailing the comedian’s past comments on transgender people, Gervais replied that “I also make jokes about AIDS, Cancer, Famine and The Holocaust. Those things do a bit of harm too. But jokes don’t.”

I do. I also make jokes about AIDS, Cancer, Famine and The Holocaust. Those things do a bit of harm too. But jokes don't. Have a nice day.

People across social media are not taking Gervais’ comments so lightly, however. “It takes a special kind of cowardice, subhuman monster to so adamantly attack one of the most marginalized and demonized groups in the world,” author and transgender woman Faith Naff tweeted.

Dupont, the writer of the article and tweet that Gervais first commented on, said she was “proud” to be featured in an article in The Advocate that “addresses the appalling nature of [Gervais’] violent transphobia.”

In addition to The Advocate, IndieWire also pondered in light of these comments if the comedian has “just tweet[ed] himself out of a Golden Globes hosting gig?” They both compared this to the homophobic tweets that cost Kevin Hart his role as the host of the 2018 Academy Awards.

Buzzfeed LGBT Editor Patrick Strudwick tweeted that Gervais is not actually trying to defend women in his remarks.

If you think Ricky Gervais is standing up for women in his spreading of transphobic conspiracy lies, just a reminder about his rape “jokes” and Aids “jokes”. He’s a 1970s dinosaur not even using irony as a disguise.

This isn’t Gervais’ first allegedly transphobic transgression. In 2016, he stood by his jokes made about Caitlyn Jenner while hosting the Golden Globes live that year as well. At that time, Gervais said in response to angered viewers on Twitter that “you have every right to be offended. Just don’t cry when no one cares.”

According to The Advocate and Variety, the Hollywood Foreign Press Association has not responded to requests for comment.