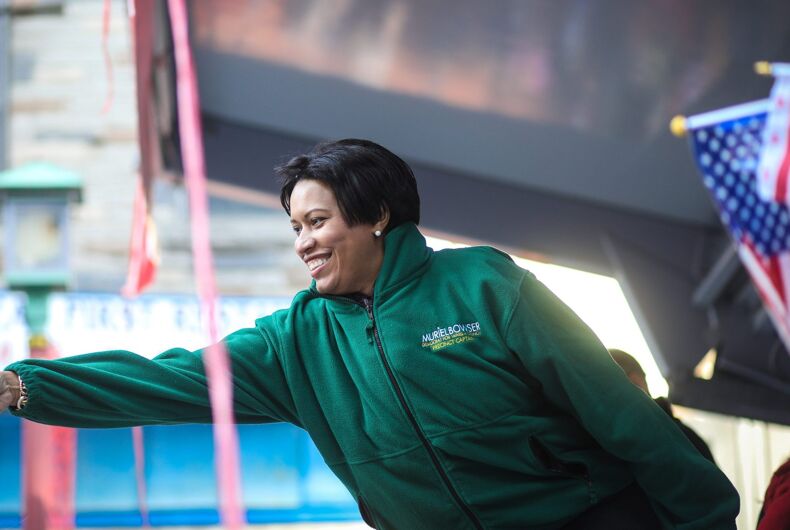 Muriel Bowser, the seventh mayor of the District of Columbia, turned in a letter to the U.S. Department of Health and Human Services (HHS) “expressing her strong opposition to a rule proposed by the Trump administration” that allows government and government-supported organizations to object to serving LGBTQ people based on their religion.

The Democratic mayor submitted the letter on December 19, the last day federal regulations would allow, saying that the White House-supported rule is “give HHS programs the ability to discriminate against Lesbian, Gay, Bisexual, Transgender, and Questioning (LGBTQ) and other marginalized groups with taxpayer funds.”

Related: Judge who was sanctioned for being anti-LGBTQ sues to get a religious exemption from the law

“Such discrimination is fundamentally wrong and goes against everything we stand for in Washington, D.C.,” she states in her letter.

“Religious objection” rules are a policy of importance to conservatives because it allows them to opt out of fulfilling any duty they are responsible for working on, such as an adoption or a surgery, if it involves any act or lifestyle they claim their religion does not support, such as same-sex marriage. The rules have been implemented in several places around the country by conservatives and the Trump administration – especially in the HHS, the federal bureau that regulates matters of medical and health concerns within the country. The HHS is overseen by Secretary Alex Azar, who enjoys rubbing elbows with anti-LGBTQ people and organizations.

These ‘exemptions’, also called ‘Final Conscience’ or ‘Conscience Prevention’ rules, have also been shot down in multiple courts across the country. It was uncovered last month that many of the ‘facts’ the HHS released in defense of the rules’ implementation were based in falsehood.

As the District of Columbia is not a state but a federally-designated district, they are directly subject to federal laws and regulations. Bowser is the highest-ranking member of the city’s executive branch, and their leading official to object to the rules.

According to the Washington Blade, Bowser joins “Democratic members of the U.S. House and Senate, civil rights advocates, and at least five AIDS groups” in objecting to the new HHS policies.

“Today and every day, I call on fellow Washingtonians to stand together in rejecting the actions that seek to divide, and to do more – not less – to support and protect our LGBTQ community, and particularly transgender women of color, LGBT youth, and other vulnerable populations,” Bowser said in her letter.

“As such, I urge HHS to withdraw this proposed rule immediately.”

The Blade’s report finds that the rule being bought into HHS is in direct response to pressure from conservative Catholic organizations who do not want to allow LGBT families to adopt children from their adoption agencies, which they had to do under previous regulations.