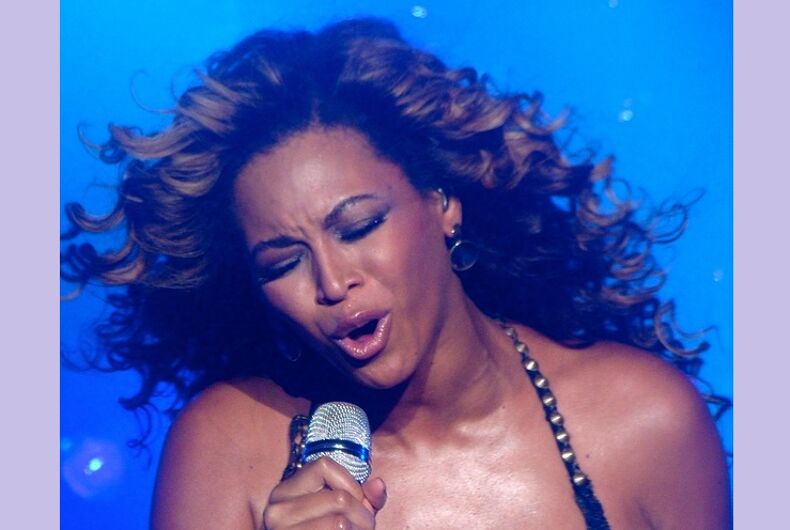 Two transgender siblings are saying that they were denied bathroom access at the Coachella Valley Music and Arts Festival last year, and they’re demanding policy changes.

The ACLU of Southern California, which is representing the siblings, sent a letter on their behalf to the festival organizers.

Navi is a trans woman and she tried to use the women’s restroom, according to the ACLU’s letter. A nearby security guard told her that she couldn’t though, and he didn’t explain why. She said that no one even complained about her using the women’s room.

So she used portable toilets near the entrance of the festival for the rest of the weekend.

Related: Did you know Coachella’s owner gives loads of cash to anti-LGBT groups?

The incident happened when Beyonce performed, which the letter says should have been a “joyous evening.”

“The treatment I experienced when trying to access the bathroom at Coachella was so far beyond embarrassing, it left me speechless,” Navi said.

“It was especially abhorrent at an event purported to promote inclusion, diversity, and authentic expression, especially as it welcomed its first Black woman headliner.”

Juice, who is transmasculine, tried to use the men’s restroom and were escorted out by a security guard. The security guard said that he would show Juice a gender-neutral restroom, but when they got outside the guard just walked away.

“In that moment I felt like I was stripped of all my dignity and embarrassed in a way that really made me feel like less of a person. No one should have to feel that way,” Juice said.

The ACLU cited Coachella’s website, which promised gender-neutral restrooms, and California law, which bans discrimination on the basis of gender identity.

“Refusing people access to the restroom which corresponds to their gender identity constitutes a denial to the full and equal accommodations, advantages, facilities, privilege, or services of a business establishment, as California courts have previously found under the Unruh Act,” the letter states.

The ACLU said that Navi and Juice want Coachella to have a written policy about bathroom access and better training for staff. They’re not suing yet, but the letter says that they might if Coachella doesn’t show that it’s working to prevent what happened to them from happening again.

“We want to raise awareness of these laws so that no one has to go through what the Huskeys went through at Coachella,” said Stephen T. Hicklin, a lawyer.