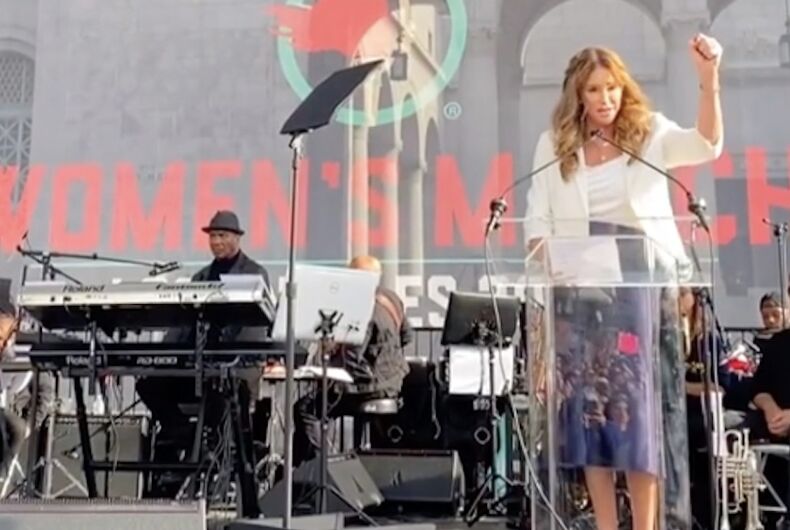 Transgender Republican celebrity Caitlyn Jenner delivered a speech for trans rights at the third annual Los Angeles Women’s March this past weekend, a march to oppose President Trump’s misogyny as well as his political stances against reproductive rights, climate change, and other progressive social issues.

In a short video posted to her Instagram, Jenner – who supported Donald Trump during the 2016 presidential elections – said, “The time is now. Women in Hollywood and across this nation are energized! It is damn time that we stop the slaughter of trans women of color.”

Related: Here’s another reason why no one likes Caitlyn Jenner

She continued, “Together as women, trans women, and cis women, we have the power to influence our communities, our families, our friends, and colleagues, and turn this country around.”

Here’s a brief video of Jenner speaking at the L.A. Women’s March:

During the 2016 presidential election, Jenner said she thought Trump would be “very good for women’s issues.” After his election, she also claimed to be having secret meetings with members of his administration.

However, early into his administration, Trump reversed an Obama-era directive allowing trans students to use facilities matching their gender identities. In response, Jenner said she wouldn’t go golfing with Trump any longer and publicly told Trump via Twitter, “You made a promise to protect the LGBTQ community. Call me.”

Jenner was wrong about his promise, though. In his speech at the 2016 Republican national convention, Trump said, “As your President, I will do everything in my power to protect our LGBTQ citizens from the violence and oppression of a hateful foreign ideology.” He never promised to protect LGBTQ Americans from his hateful domestic ideology.

In 2018, Jenner penned an editorial for the Washington Post, where she wrote, “Sadly, I was wrong [about Trump]. The reality is that the trans community is being relentlessly attacked by this president. The leader of our nation has shown no regard for an already marginalized and struggling community.”