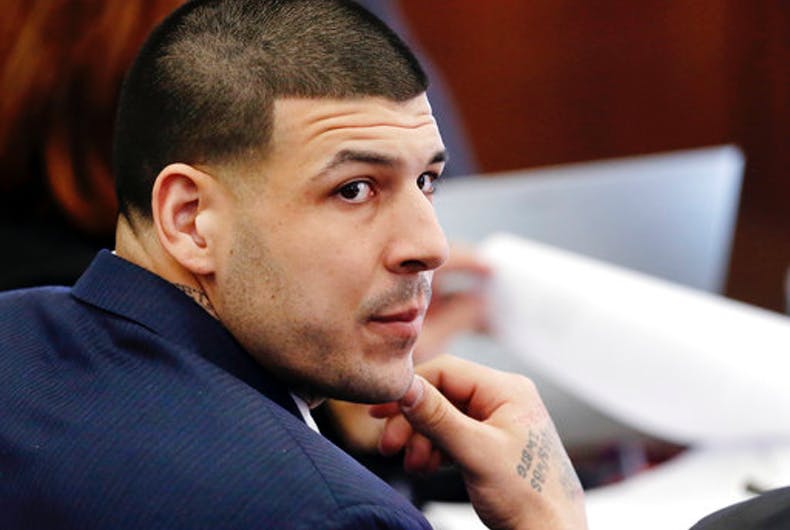 It was only as I grew into my role as a gay activist that I became interested in the way that the culture of sport ties in with the LGBTQ community and why there has always been such a lack of openly LGBTQ players in football, basketball, baseball, soccer, and other sports.

I learned that this scarcity speaks to something deep about the culture of homophobia and toxic masculinity that exists not only in sports but in American society in general. It’s the same sort of machismo, driven by insecurity among many men in our country that helped result in the election of someone like Donald Trump.

I remember watching CNN the morning the news broke regarding the arrest of New England Patriots star Aaron Hernandez back in 2013. He was a suspect in the murder of his fiancee Shayanna’s sister’s boyfriend, Odin Lloyd. I was of course horrified and saddened by the story, but beyond that didn’t take much notice.

In 2017, however, the story came back into my realm of consciousness when I read online that Hernandez had died of suicide in prison and that this occurred just days after a news report that Hernandez was gay. Perhaps he killed himself because the news of his sexuality was beginning to leak out?

In the months and years since then, more information has gradually come out. Hernandez apparently had a male romantic partner in prison, and it has been speculated that his motive for committing murder may have been that his victim, Odin Lloyd, caught him in a “compromising” situation and was planning to reveal his secret.

Just a few days ago I watched the docuseries Killer Inside: The Mind of Aaron Hernandez that recently premiered on Netflix. It revealed some further shocking revelations, including that Hernandez had been abused by an older man when he was a child, that his father was extremely homophobic, and also that he had a gay relationship as a closeted teenager in high school.

The documentary delved into a lot of topics unrelated to Aaron’s homosexuality, including the death of his father early in his life and the autopsy that showed he was suffering from a severe case of CTE, a degenerative neurological condition that has been found in many NFL players with a history of head injuries.

My conclusion after watching the series and researching the details of his story is that we will never really know why Hernandez did what he did. It could have been any, or all, of the factors listed above.

An interesting sidenote is that in the 2016 ESPN docuseries O.J.: Made In America, they touch on the fact that O.J. realized as a young man that his father was gay and that this may have been a contributing factor to the rage that caused him to commit the heinous crimes he allegedly did later in life.

I don’t think any of us imagined back at the height of the O.J. case in the 1990s, or during the early days of the Hernandez case in the 2010s, that the way society and people deal with homosexuality would’ve somehow tied into these stories.

I recognize what a sensitive, precarious subject this is, and I want to be clear that I am not, in any way, making excuses for someone who was clearly a very ill, deranged, you might even say evil man. Ultimately, Aaron Hernandez was responsible and guilty for his crimes, and only he alone.

I do think, however, that it is worthwhile for us to examine all the different reasons Hernandez may have done what he did, and whether the sport’s and society’s discrimination and intolerance of LGBTQ people might have been a part of it.

One of the most compelling parts of the new Netflix series is when they interview Ryan O’Callaghan, a former Patriots player himself who almost killed himself because he was gay but ultimately decided to come out and use his journey to help others.

What a different road Aaron Hernandez could’ve chosen. How different things might’ve been if he’d taken a path of openness, love, and helping others. He could’ve made such a positive difference for the world. And that ultimately is the tragedy of Aaron Hernandez.

These loving parents threw their gay son a “gayceañera” party