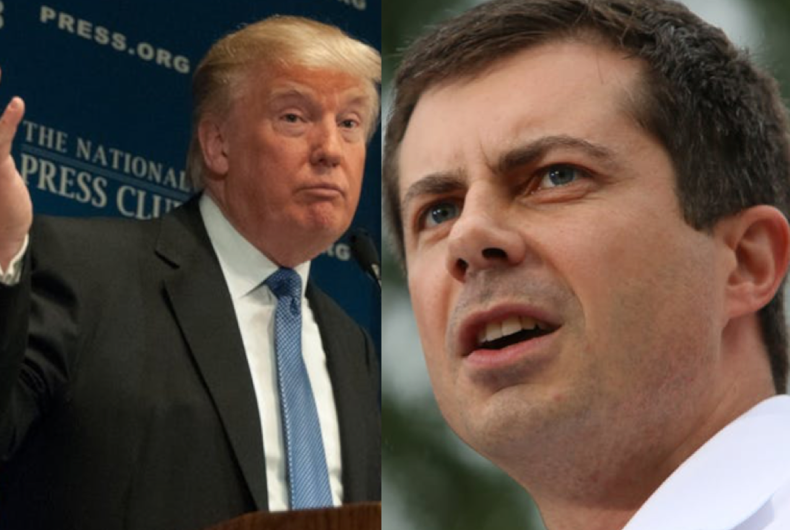 In an interview on Friday, Democratic Presidential candidate Pete Buttigieg was asked about the fact that current incumbent Donald Trump told a crowd that he dreams about him.

“I will admit it did bother me when he says he dreams about me,” Buttigieg said at a live-streamed interview for The Washington Post. “I don’t know what goes on in this president’s dreams, but I’m sure I want absolutely nothing to do with them.”

Trump apparently made his comments on ‘dreaming’ about Buttigieg at a campaign stop this week in Hershey, Pennsylvania. In his speech, Trump continued his months-long campaign to try to make his moniker for Buttigieg stick (Alfred E. Neuman, the name of MAD Magazine‘s mascot), but then he abandoned this and decided to make fun of the pronounciation of Buttigieg’s name as well.

According to The Advocate, Trump is transcribed as saying, “This guy Buttigieg, Boot-edge-edge. Can you believe he’s doing well? He’s like the leading fundraiser. I dream about him! It’s true. No, Boot-edge-edge!”

In his response on Friday, Buttigieg showed no concern about Trump’s mocking of his candidacy, outside of the concern he showed upon learning he’s been part of at least one of Trump’s nights. “I’m not that worried for it — I’m gay and I grew up in Indiana…that kind of schoolyard talk doesn’t bother me. I’ve also seen a lot worse incoming than a tweet full of typos.”

Trump’s unwarranted revelation in regards to Buttigieg does reflect the mayor of South Bend, Indiana’s astronomical rise from being a complete outsider at the beginning of the year, when he was barely on primary radars. It wasn’t until April when Buttigieg was first mentioned by Trump, and later that spring he began mocking the candidate’s young appearance with the Alfred E. Neuman nickname.

It’s been reported that Trump spends executive time creating catchy nicknames for his political opponents – “Low Energy” Jeb Bush, “Crooked Hillary” Clinton, and Elizabeth “Pocahontas” Warren among some of the worst-known. The more Trump tries to make fun of Buttigieg, the more clearer it becomes that the latter’s a serious contender.

Trans people in Japan can no longer be banned from bathrooms, court says