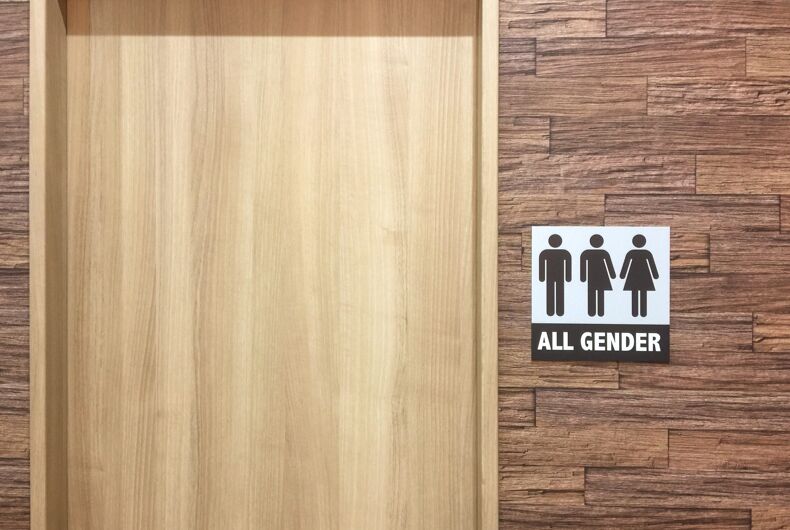 A transgender woman employed by the Economy, Trade and Industry Ministry in Japan has successfully sued her employer for denying her the right to use the bathroom that aligns with her gender identity.

A Tokyo district court awarded ¥1.32 million in damages to the woman for being forced to use a bathroom other than the women’s bathroom on her office’s floor, which District Judge Kenji Ebara says is illegal because it “constrains people’s benefits of living their lives in accordance with their self-identified genders.” The ruling also requires the ministry, and all employers, allow trans people to use the bathroom of her choice, without notifying anyone else of her transgender identity.

Ebara also made it illegal in his ruling for employees to require surgery from their employees to recognize their gender. This was in response to the fact that the Ministry official in charge of personnel told the woman that she should “go back” to being a man if they’re not going to have reassignment surgery. Ebara made it known that he found it “unacceptable” and “extremely lacking in validity”, and that it was also an “abuse of discretion” to have the employee identify herself when using the bathroom with others inside.

As of this year, the Supreme Court of Japan ruled that all people having gender reassignment must be sterilized prior to surgery, in addition to being unmarried and have no children under the age of 20, and surgically transitioning is the only way to get your gender legally changed.

According to The Telegraph, this is the first decision on a case like this in Japan. Transgender people and their livelihood are especially difficult in Japan, where a recent survey reportedly reflects that most of the population cannot even correctly define the word ‘transgender’ – a trans woman was outed and humiliated on a TV network last month, for which the network issued an apology for its negligence.

“The ruling will encourage other people having the same concern. Employers should respect human rights,” the woman is reported as saying at a press conference following the ruling. The Ministry will “review the case” before deciding to file any appeals.

While it’s reported that the employee was allowed to come to work dressed in her current gender expression as early as 2010, it wasn’t until 2015 when her Ministry coworkers started to complain and asked her to use a bathroom other than the women’s facility on their floor, either leaving the employee to use a bathroom for disabled people or a women’s bathroom on a different floor. The ruling ends her nearly 4-year long legal battle for her rights. According to Japan Today, the 1.3 million yen she will receive is equivalent to US$12,000 – only 1/13th of the amount in damages she initially requested, $16.5 million yen.

Is Donald Trump’s pending impeachment acquittal in the Senate a failure of the Democrats?