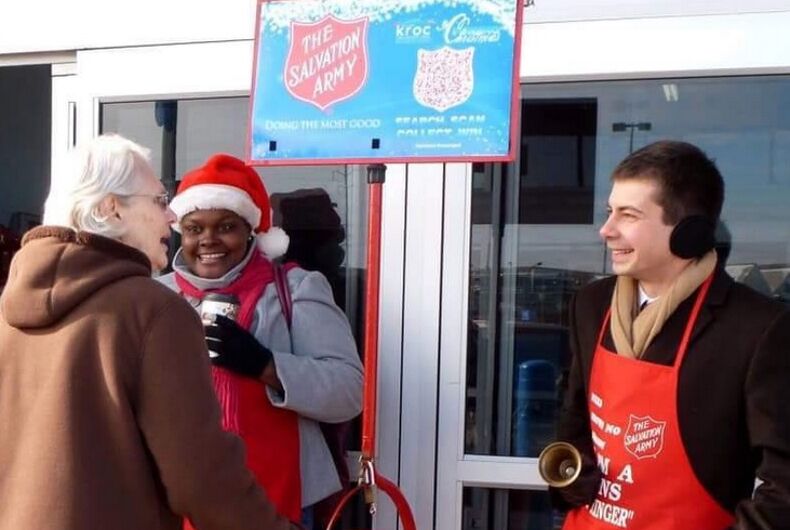 A photo of South Bend Mayor and 2020 presidential hopeful Pete Buttigieg ringing the donation bell for the Salvation Army has surfaced on social media.

The photo was taken of Buttigieg outside the PEGGS restaurant in South Bend as part of their annual “Red Kettle Ring Off,” according to Out.

A 2015 article in the South Bend Tribune describes the event as a competition with the city of Mishawaka, Indiana, and it notes that Buttigieg helped the organization raise $2900 that year.

A 2017 segment on WSBT, South Bend’s CBS affiliate, shows Buttigieg ringing the bell as part of the yearly competition.

“The competition is fun, but this is really about those who are most in need,” Buttigieg said in the segment. “We’ve got a lot of folks who are facing a holiday season who are facing challenges and organizations like the Salvation Army are doing so much to help.”

The Red Kettle Ring-off is under way! Text SOUTHBEND to 91999 to donate for today’s friendly competition with Mishawaka. pic.twitter.com/gmfRynko13

The Salvation Army has a long history of anti-LGBTQ activism. They have lobbied against LGBTQ equality legislation, including the law that legalized homosexuality in New Zealand and local and state laws that banned discrimination against LGBTQ people. They have claimed religious exemptions to discriminate against LGBTQ workers.

As recently as 2017 the Salvation Army was caught in a sting operation by New York City because they refused to take in some homeless transgender people and housed others with the wrong gender.

The Salvation Army has treated its anti-LGBTQ discrimination as a PR problem and has refused to apologize for it.

This past March, Buttigieg said that he “kind of approve[s] of [Chick-fil-A’s] chicken” and that he wanted “to broker that peace deal” between LGBTQ people and Chick-fil-A. The “peace deal,” according to Buttigieg, included talking “about some of the pieces of what I carry with me and see[ing] if it rhymes with their life experience,” but he did not mention Chick-fil-A stopping its donations to the Salvation Army or apologizing as an important part of the deal.

The first same-sex couple just won “Dancing with the Stars”